Page 94 of The Search For Christian America

I'm enjoying this book. From what I can tell, it was written to Francis Schaeffer. That's implicit throughout the book. The authors respected Schaeffer as a Calvinist theologian, but thought he greatly erred when he put on his historian and political scientist hats. Schaeffer was, as well, a Sola Scriptura evangelical who disbelieved in the natural law and the Church's incorporation of Aristotle. This is key; because what Noll et al. write that is reproduced below doesn't work unless one accepts this premise. Natural reasoning as such is "secular" because it is not from the Bible. Theistic natural law merges God and natural reason. It's the natural law (as discovered from reason) with God to make it binding (not everyone accepts you need God to make the natural law binding in an "ought" sense; but America's Founders seemed to believe this). The authors argue that without a grounding in the Bible, it was easier for later secularists to separate God from nature. 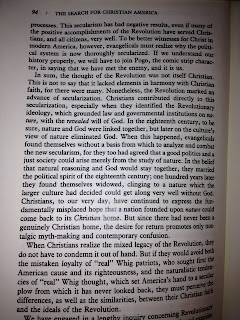 I know this post could to lead to arguments. But one minimal point on we should all agree: The political theology of the American Founding was not Francis Schaeffer's which believed in the Bible, but not natural law (which has its origin in the noble paganism of Greece and Rome and was later incorporated into the Church by Aquinas). Hell, I'm not even sure if Schaeffer's Calvinist resisters like Rutherford believed in this. (I'm no expert in them; but I've seen evidence that they believed in the natural law and like Aquinas, cited Aristotle as an authority on part with early Church Fathers; John Knox did; though I can't vouch for what he argues.)
Posted by Jonathan Rowe at 9:51 AM

Good and wise men, in all ages, have embraced a very dissimilar theory. They have supposed, that the deity, from the relations, we stand in, to himself and to each other, has constituted an eternal and immutable law, which is, indispensibly, obligatory upon all mankind, prior to any human institution whatever.

This is what is called the law of nature, “which, being coeval with mankind, and dictated by God himself, is, of course, superior in obligation to any other. It is binding over all the globe, in all countries, and at all times. No human laws are of any validity, if contrary to this; and such of them as are valid, derive all their authority, mediately, or immediately, from this original.” Blackstone.

Upon this law, depend the natural rights of mankind, the supreme being gave existence to man, together with the means of preserving and beatifying that existence. He endowed him with rational faculties, by the help of which, to discern and pursue such things, as were consistent with his duty and interest, and invested him with an inviolable right to personal liberty, and personal safety.

Yeah the authors would argue TFR is not biblical.

True, it's not biblical. But as you note, while the Spanish Jesuit Francisco Suarez and the Dutch Protestant Hugo Grotius were arguing that natural law doesn't require God, the Anglo-Americans were putting Him back in!

In fact, natural law has always been the alternate way to argue the same truths without appealing to the authority of the Bible.

"The law of nature and the law of revelation are both Divine: they flow, though in different channels, from the same adorable source. It is indeed preposterous to separate them from each other."
---James Wilson, Of the Law of Nature, 1804

[Wilson was one of the few signers of both the D of I and the Constitution, and was later a Supreme Court justice.]

"In 2005, Christians who attended church regularly earned more than $2-trillion but donated less than 1 percent of that figure to charitable causes. Christian churches generally advocate tithing about 10 percent of one's annual income each year."

You haven't become any more generous since then.

CHRISTIANS, YOU OWE THE LORD $198 BILLION!!! If you're broke because of our economic downturn, maybe you should learn who's behind it. It's been their agenda for LITERALLY centuries: