Did the Qur'an Influence the Founding of America? 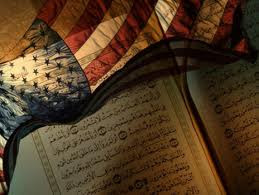 For those who have followed my blog posts with any regularity, you are surely aware of the fact that I am 100% against the notion that the United States was founded as a Christian nation. In my opinion there are simply too many gaping holes in the "Christian Nation" argument that it will never be able to hold water and effectively float.

But an even sillier notion than the one often regurgitated by the Christian nationalist zealots is one being taught by Professor Azizah Y. al-Hibri, who was recently appointed by President Obama to the Commission on International Religious Freedom. In the following video, Professor al-Hibri seems to suggest that the Founding Fathers (with particular emphasis on Thomas Jefferson) may have been influenced by the teachings of the Qur'an when founding the United States:

Let me first state that I am in no way a "Muslim hater" like so many ignorant Americans today. Having read the Qur'an and done some detailed personal study of the religion, I am of the opinion that Islam is a beautiful, inspiring and relevant faith. I am in envy of the devotion that so many Muslims have towards their faith, particularly when it comes to their deep love of prayer. In my opinion nobody, not even the best Christians, can pray like the Muslims.

With that said, the notion that Islam and the Qur'an played a role in the founding of the United States is so historically stupid that I'm not sure where to begin. Aside from the obvious fact that none of our founding documents make even a remote reference to Islam, Professor al-Hibri seems to forget that Islam and the Qur'an are not the exclusive sources on earth which teach about a separation of Church and state. The fact that Thomas Jefferson owned a Qur'an does not mean he gleaned his ideas about religion and government from it. In fact, Jefferson is very clear on who his sources of inspiration were. Men like Cicero, Montesquieu, Locke, etc. were his chief sources, not the Qur'an. Jefferson was a book junkie. Owning a Qur'an was a staple in his library, but at no time was it a Jefferson favorite. Heck, Jefferson spent far more time with the Holy Bible than he ever did with the Qur'an.

Besides, do you honestly think that Jefferson, a man who largely detested organized Christianity and rejected most of its chief doctrines, would somehow look to Islam for his inspiration? Especially when it came to the founding of the American republic?

The way that she forces the issue of Islam's bearing on Jefferson, the First Amendment, and the "cover-over" of relgion and State being "unified" in "umma" is frightening...When "umma" is primarily understood to be about Muslim communities...and international connection of the "faithful"! Global moves toward assuring Islam's dream and hope of subverting "all" under "Allah"! (and the Divine Command Theory?)....

This is what I read:

Home > Library > History, Politics & Society > Mideast & N. Africa Encyclopedia
Arabic word for community, especially the Islamic community. The Arabic word umma, derived from umm ("mother"), is a term used in Islam to denote the worldwide community of the faithful. In the twentieth century, the term was sometimes used by Arabs to mean "nation" in a political sense, both in global terms (the pan-Arab umma) and local terms (a specific nation).

I agree, the assertion is ludicrous on its face.

But this occurs to me: religion has become (unquestionably to our detriment) painfully entwined with US politics*. That US Muslims are on the defensive is completely understandable and I, personally, am comfortable with cutting them some slack on their spin. After all, they're up against a dangerously entrenched anti-Muslim spin machine.

*Fortunately, religion does not yet have the foothold in governance and public policy that it enjoys in political play. But for the first time since my first lever-pull (for Reagan, fwiw), I'm concerned.

IIRC, Jefferson took on the Quran because the body of Muslim law was so well-developed, and this was during his studies in law. IOW, his interest was not primarily theological.

I am 100% against the notion that the United States was founded as a Christian nation.

Let me first state that I am in no way a "Muslim hater" like so many ignorant Americans today.

Tom,
You're saying that Jefferson used Islam to inform his understanding of "LAW"???That is political correctness, if I've ever heard it...What is you basis for this statement? I thought Rome and Grotius were the foundations of our "Law"....

What about the history of Islam? The average "Islamic Joe" isn't agressive, but Islam is not on defense here. It is an offensive plan (sanctioned under Allah) to take over the globe! And this is done by strategically planting those that want "tolerance" toward thier religious views! How can we be tolerant to those that are intolerant? Stoning, lack of free thought, lack of personal rights, degradation of women, etc.???Islam is a culture that is in such opposition to the West and the openness of the West, that we cannot be duped!! And it is a war, a war for our very "way of life"!!!

.
Not to take sides regarding this issue; but, foundations are far different than the pillars that hold up the total structure of the law.
.
I don't see any argument in what Tom wrote.
.
In fact, he seems to be spot on.
.

I did not notice the italics of the two quotes...is he emphasizing them positively or negatively...since he stated "political correctness", I would assume that it is a negative connotation...

Of course, the Catholic Church would also have some "irons in the pot", as they would want religious claims to hold sway over world domination. Scientists/humanists would want environmental issues, limited resources, etc. to hold sway globally! So, isnt' the position of the religious to "condition" others into conforming into 'mindless robots" that have no choice???

.
Here's a lin k might be of interest to you, Angie.
.
http://en.wikipedia.org/wiki/Logical_positivism
.

A combination of empirical "evidence" in human form,("wisdom", "logos" "incarnation") verifying the principle of "saviors", "messiahs", "heroes", which affirms the reality of "mythological" beliefs.

Isn't this the agenda of psychological, sociological, anthropological, and religious studies?

Such investigation into 'mythological beliefs" are done through getting humans to "incarnate" the "message of the myth"!

I believe this is what is so special about our Founder's vision. They allowed for various convictions/conscience about "mythological beliefs", but they gave a form of government that protected such beliefs, as long as they did not impinge on others and their beliefs...Individual rights meant that "the human" was of ultimate concern and greatest value, which was humane.

I think that our concern of religion and religious zealotry has a lot to do with the "poltiical correctness" that makes it impossible to speak against, because of fear of discrimination. Such fear undermines our basic principle of "free speech", "free thought", and "free society"...Group demand rights at the expense of other groups. And such "group think" gives the federal government more power and control to undermine liberties of us all...in the name of political correctness!

Individuals can freely choose to associate, but when identities become enmeshed such that there is no distinction between the personal and corporate; then, there is an unhealthy identity that does disservice to our society and the individual himself.

Rationality is about understanding and committing to certain values that are held by groups. But, it is not about irrational commitment under fear of retribution.

Who were these two statements made by?

The first is intolerant of Christianity, while the latter is a positive position toward Islam...is it "Black theology" because "people of color" adhere to this mythology above the Christian? Is it a resentment about colonization from the "white man"...is it Marxist in thrust to equalize and undermine our power as a nation?

From the video, she said there were funds to investigate Islam and Jefferson1!! Will this be the new political thrust...to protect the religious consciences of "people of color"?

With regard to Christianity there is the 1700 year tradition from which our colonial culture evolved. Even when there is no explicit acknowledgement one has to consider implicit influences as appropriate. With regard to Islam there is nothing substantial to consider.

Even if we go back to the long interaction of the two cultures it is basically as a transmitter of classical philosophy that Islamic thinkers have contributed to the Renaissance (before they expunged classical thought from their own culture). Scientific contributions, on the other hand, are significant. Social thought owes nothing to Islamic culture (with perhaps the exception of the institution of race-based slavery) and religion even less.

Good points, Jason. But, didn't the Catholic Church when having political power under Constantine, undermine or subvert some term/word in their text, that dis-empowered the Muslim?

Deterministic rendering of reality are forms of "mathmatical" precision, in the name of "social order". Such "order" does not allow for variances, other than "emergent properties" (which also has been "annointed" by evangelicalism, as to the emergent church movement!)...Systemization in the name of "control", "order" or "understanding" doesn't take into account probabilities, creativity, or complexity...and such social solutions would be affirmed by Marxists and Islamists, as both like order. One is relgiously framed, while the other is poitically framed!

Revisionism is the 'name of the game" in post-modernity. There isn't any way to evaluate or discriminate!!!

"Community" (umma) is a political term, as it defines a group of people. And such groups could form political communities like we have in local politics in our free society/ nation state, OR it could be communitees, as defined by religion!

Angie, Constantine legalized Christianity 300+ years after Jesus’ birth. Christians were overjoyed that he credited a military victory to the sign of the cross (if I remember correctly). One could say a more muscular Christianity was being born. Apostolic Christianity had no political program and certainly no military arm. Islam, however, was founded by a military-political leader who established a state. I was once told that in religious studies Mohammad was described as Jesus and Constantine combined, as a rule of thumb.

The Eastern Roman Empire continued to fight the Islamic expansion from the 7th century until Constantinople fell in 1453 AD. Edward Gibbon is a good reference for the long drawn-out story.

It’s hard to imagine a separation of mosque and state on a large scale for a sustained period. Turkey used to have it but that is becoming undone. I doubt this will be resolved in my lifetime.

I do not find it difficult to believe Jefferson would gladly quote a verse from the Koran if it supported his agenda. I doubt that he looked to Islam for his inspiration. But he took support where he found it.

I would need a good deal of context and understanding to conclude that the Jefferson quote is referencing the Koran. But, in light of Jefferson's religious outlook, it doesn't seem so outrageous?