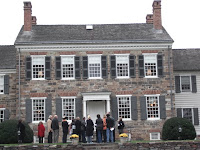 Historical Society of Princeton sponsored a house tour on November 6 that included the country home of John Witherspoon. It remains a private home and has been enlarged by the addition of several wings. Some of the original rooms are only slightly modified. In the picture, to the right of the front door, was Rev. Witherspoon’s library-study, which I estimate to be about 13ft square (similar to mine!)

The guide explained that Rev. Witherspoon called his home Tusculum after Cicero’s country estate. Overall our guide gave an excellent talk on the Witherspoon’s life and country home. When I asked, he gave further details on Witherspoon’s relationship to James Madison. By the way, he noted that the right reverend would have pronounced his name Weatherspoon. Kudos to the Historical Society for providing access to this site and knowledge guides.
Posted by Jason Pappas at 2:55 PM