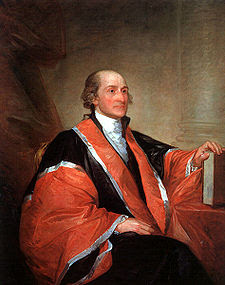 Today, September 24 marks the 221st anniversary of President George Washington's nomination of John Jay to be the first Chief Justice of the United States. A respected attorney and noted negotiator (he helped with the treaty negotiations that ended the War for Independence), John Jay possessed a brilliant mind and a solid reputation. As co-author of The Federalist, he was a logical choice for the newly established Supreme Court.

Jay's appointment was made possible, when on the same day (September 24, 1789), Congress passed the first Judiciary Act under the new Constitution of the United States, which established six seats on the Supreme Court of the United States and a network of inferior courts to round out the judicial branch of government. President George Washington responded to this by immediately nominating John Jay as Chief Justice and naming John Rutledge, William Cushing, John Blair, Robert Harrison, and James Wilson to be associate justices.

Though Jay was a conscientious and dedicated Chief Justice, his most notable achievement during his years on the Supreme Court had nothing to do with the Court, but rather his role as principal negotiator with the at-the-time hated "Jay Treaty." Jay's efforts, though highly controversial, helped secure a much-needed peace with Great Britain, postponing a war that the nascent United States could ill afford to fight. That peace would last until 1812.

When Jay left the Court, he found himself elected governor of New York, where he fought for penal and judicial reform as well as the abolition of slavery. Jay declined a reappointment to the Supreme Court in 1800, citing the health of his wife. He retired from active politics and died in 1829.

John Jay's contributions to the formation of the United States are noteworthy and deserving of our respect. These words, summing up the legacy of the American Revolution and the cause of popular government in America, echo through the centuries in a way that remain as relevant today as ever before...

"The people are Sovereign. ... at the Revolution, the sovereignty devolved on the people; and they are truly the sovereigns of the country, but they are sovereigns without subjects... with none to govern but themselves; the citizens of America are equal as fellow citizens, and as joint tenants in the sovereignty."

Helluva robe. A pope would be jealous.

One of the greatest of the Founding Fathers.

Incidentally, Jay could have been appointed without the Judiciary Act. The Chief Justice is the only judicial official mentioned in the Constitution, although then only in passing. But it is generally held that the position is mandated by the Constitution. No other federal judicial position is, however. Theoretically, Congress (along with the President) could abolish all federal judicial positions except for that of the Chief Justice.

And I forgot to add, an ardent Federalist. What's not to like?

Brian has kicked off a great subject here.

It would be great to read some good comments on the early court.
.

Hmmm...I feel a set of non-book review posts coming on...

He lived to 1829? Long enough to see Andrew Jackson elected!

Did he write much during his last decade?