Washington and the Newburgh Conspiracy 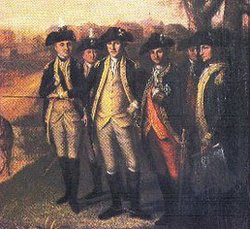 In 1781, after roughly eight years of bloody warfare, the infant United States of America appeared to be on the brink of victory. The American victory at Yorktown in the latter part of that year had severely damaged England's desire for a continued conflict with its colonies. In addition, France's involvement in the conflict (which cannot be underestimated as a critical success for the Americans) signified to the British that the American cause for independence was evolving into a virtual world war. Faced with such predicaments, the British were eventually forced to conclude a peace with their former colonies.

Contrary to what many historians believe, the Battle of Yorktown was NOT the coup de grâce that so many make it out to be. Before that peace could be negotiated, another two years would pass before both Britain and America would sit down at the bargaining table. During this time, the Continental Congress faced a severe financial crisis, in which they were unable (or possibly not fully willing) to support Washington's army. Though the fighting had all but stopped, Washington was still forced to maintain the Continental Army until the final peace treaty was signed. As a result, the Continental Army suffered greatly in terms of hunger, lack of equipment, fatigue and cold.

In response to these justifiable grievances, several officers withing the Continental Army formed an anonymous pact to overthrow the Continental Congress and establish a new government. This coup was backed by several of Washington's most trusted men, who felt that the cause of liberty was being threatened by the politicians at home.

In the end, Washington was able to put down the rebellion, but it was far from easy. Here is an excellent article from the History Channel Website on how Washington handled what is now known as the Newburgh Conspiracy, which was, in my opinion, Washington's finest hour. As Washington's men conspired to lead their "valiant" charge and seize power for themselves, Washington was preparing his own response:

When word of the letter and its call for an unsanctioned meeting of officers reached him, Washington issued a general order forbidding any unsanctioned meetings and called for a general assembly of officers for March 15. At the meeting, Washington began his speech to the officers by saying, “Gentlemen: By an anonymous summons, an attempt has been made to convene you together; how inconsistent with the rules of propriety! How unmilitary! And how subversive of all order and discipline...”

Washington continued by pledging, “to exert whatever ability I am possessed of, in your favor.” He added, “Let me entreat you, gentlemen, on your part, not to take any measures, which viewed in the calm light of reason, will lessen the dignity, and sully the glory you have hitherto maintained; let me request you to rely on the plighted faith of your country, and place a full confidence in the purity of the intentions of Congress.”

When he finished, Washington removed a letter from his breast pocket that he had received from a member of the Continental Congress. He hesitated for a moment as he looked down at the letter before fumbling to retrieve a pair of spectacles from his pocket. Before reading the letter, Washington, in an almost apologetic tone said, “Gentlemen, you must pardon me. I have grown old in the service of my country and now find that I am growing blind.” The eyes of most of his audience filled with tears. The content of the letter became irrelevant as the assembled officers realized that Washington had given as much or more in the service of the new nation as any of them. Within minutes, the officers voted unanimously to express confidence in Congress and their country.

In a letter to the Continental Congress dated March 18, 1783, Washington wrote to assure the body that the unrest of officers was over, writing, “The result of the proceedings of the grand convention of the officers, which I have the honor of enclosing to your Excellency for the inspection of Congress, will, I flatter myself, be considered as the last glorious proof of patriotism which could have been given by men who aspired to the distinction of a Patriot army; and will not only confirm their claim to the justice, but will increase their title to the gratitude of their country.”

George Washington was the greatest of all the Founding Fathers. Second to none. Tis a shame that so few Americans truly appreciate all the things he did, this one being among the most significant.

This could have turned into something like modern latin America with one coup after another. As much as I value rights that has to be order as well. Anarchy never works.

Washington, in my mind, was the greatest of the founders, but I must quibble a bit. The phrase "Contrary to what many historians believe" is a bit misleading. Royster, Higginbotham, Flexner, Chadwick (who, unlike the others mentioned, actually quoted Lt. Samuel Shaw who wrote the only firsthand account of what happened), and others have written at length on the subject.

Reading their interpretations, they may argue over the level of danger in the Newburgh Conspiracy, but they all agreed that Washington extinguished all possible insurrection (be it a raging fire or just a few hot coals) then and there.

Truly, Washington was a remarkable man.

I'm sure that if Washington chose to lead an insurrection in an attempt to become a dictator, then most of his men would follow. He must be one of the few great leaders in history who was reluctant to be in a position of power. Many men throughout history took a different path.

Yet more evidence that Washington truly was the one indispensable man during the Founding Period, both in its Revolutionary phase and during the early Republic. We were fortunate, some might say Providentially so, to have a man like Washington leading the country.

Historian Richard H. Kohn has his doubts there was any coup in mind. Google his name with "Newburgh Conspiracy." Apparently many other historians including Joseph Ellis [who thought Hamilton might have had a hand in the affair] are inclined to agree.