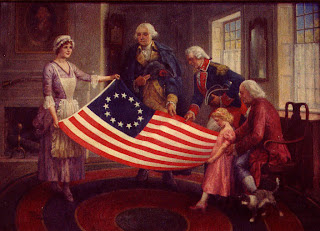 The contributions of women during the American Revolution (and in virtually every other era of history) have often been overlooked or obscured thanks in part to the chauvinistic trends of early historiography. Despite such trends, the occasional feminine hero has emerged from this hazy background to claim their rightful place alongside other fellow revolutionaries. Women like Abigail Adams, Dolly Madison and "Molly Pitcher" are remembered in countless paintings, monuments, and history books for their contributions to the "cause of liberty."

Arguably one of the most popular female figures of the American Revolution is Betsy Ross. In fact, the Betsy Ross House and Memorial in Philadelphia is one of the most visited tourist attractions in all of Philadelphia. We of course remember Ross as the original designer of the first American flag in 1776. In fact, the first American flag is rarely referred to as the "Flag of '76" but as the "Betsy Ross Flag."

But is the story true? Did Betsy Ross really create the first American flag?

As the legend states, Betsy Ross, who had recently lost her first husband in the war, received a visit from none other than General George Washington and two other members of the Continental Congress, who admonished Ross to create a flag of "thirteen stripes and thirteen stars." The stars were to be in a circular pattern, to symbolize the fact that, "no colony would be viewed above another." The legend goes on to state that as soon as George Washington's boots stepped out her front door, Betsy Ross set about making the first American flag.

So how true is this story?

Unfortunately there are little or no primary sources to prove the Betsy Ross story. In fact, the only evidence we have to defend the Betsy Ross story comes from Ross' grandson, William Canby. Ross supposedly related her story to Canby (who was eleven at the time) while on her deathbed. Canby then waited another 30 years before publicly announcing the story in a paper to the Historical Society of Pennsylvania (click here to read a copy of Canby's paper). By then, roughly 100 years had passed since the alleged visit between General Washington and Betsy Ross.

Though the story cannot be 100% confirmed, it is important to remember that it also cannot be completely rejected. To be certain, Betsy Ross and her first husband had established a semi-successful upholstery business in Philadelphia. If George Washington had commissioned Ross to make the flag, perhaps he learned of her business while attending the Continental Congress in Philadelphia. Skeptics, however, argue that there is little likelihood that Washington would have visited Ross in 1775, due to the fact that he was extraordinarily busy and quickly departed the city to take command of the Continental Army. But again, none of this conclusively refutes William Canby's story (though it does cast some serious doubt on it). Historiann's review of Marla Miller's Betsy Ross and the Making of America best describes this virtual "tug-o-war" over Betsy Ross' ultimate legacy:

Betsy’s collaboration with the Revolutionary government as a flag maker can’t be dismisssed merely as wartime profiteering or political exigency. Miller offers two full chapters on the question of Betsy’s contribution to creating the U.S. national flag in the late spring of 1777, and concludes that there’s both verifiable merit and dubious myths in the family tales her daughter and grandson told in the nineteenth century. As we have learned about “The” Declaration of Independence, there were many flags for many different purposes and many different flagmakers working in Philadelphia at the time. Miller concludes that Betsy was certainly one of them, and that her work for the war effort as the very young widow Ross probably reflected her real political sympathies. On the other hand, while there’s no evidence one way or the other as to what kind of work she did during the British occupation of Philadelphia in 1777-78, Miller concludes that "it’s hard to imagine her finding among the suffering community of rebellious Philadelphians enough sources of income that she could refuse on principle to fabricate tassels, mattresses, chair covers, or camp equipage for enemy quarters during the entire course of the occupation," (Hat tip: John Fea)

In reality, the question of whether or not Betsy Ross made the first American flag actually misses the point. During the American Revolution, literally dozens of different flags were used to commemorate a large assortment of events. Such is the case with our American flag as well. As historian and Pulitzer Prize-winning author Laurel Thacher Ulrich points out:

There is really no point in arguing over who made the first flag because there wasn't one. The stars and stripes that we know today had multiple parents and dozens of siblings. True, on June 14, 1777, the Continental Congress passed a cryptic resolution specifying that "the flag of the thirteen united States be 13 stripes alternate red and white, that the union be 13 stars, white in a blue field representing a new constellation," but nobody specified the shape of the flag, the arrangement of the stars, or the ratio of the canton to the field. In October 1778, Benjamin Franklin and John Adams actually told the Neapolitan ambassador that "the flag of the United States of America consists of thirteen stripes, alternately red, white and blue." Flag sheets from the 1780s and 1790s do in fact show flags with three-colored stripes. As for Betsy's nifty five-pointed star, a Smithsonian study showed that four-, six-, and eight-pointed stars were far more common. Although Charles Wilson Peale's 1779 painting of George Washington at Princeton shows stars in a circular arrangement on the general's flag, the stars themselves have six points.

Despite the controversy, Betsy Ross (and the flag she allegedly created) are likely to remain shrouded in mystery for generations to come. Perhaps the mystery is what makes the "Betsy Ross Flag" so intriguing. After all, the thought of a lonely and patriotic widow, bravely sewing together America's first colors is as American as the treasure map on the back of the Declaration of Independence.

But that's a story for another day.
Posted by Brad Hart at 4:19 PM

Click here to know Who Designed The American Flag History