A priceless phrase is coined 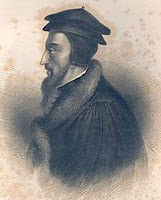 Happy birthday wishes to the man who coined the phrase “Great Architect of the Universe.” Yes, John Calvin would be 500 years old today. More than any Masonic constitution, edict, ritual or custom, the simple phrase “Great Architect of the Universe” distinctly earns the credit for making Freemasonry’s ecumenical approach to membership understood to Mason and non-Mason alike. And that non-sectarian practice, born in the Masonic lodges of early 18th century London, would be carried across the Atlantic and be transmuted into a fundamental component of American Constitutional law. (I do not credit Freemasonry with that, but the kinship must not go ignored.)

Calvin, the legendary French troublemaker, devised this phrase in his “Commentary on Psalm 19,” which sometimes is translated to say Supreme Architect.

(The 19th Psalm itself is worthy of every Freemason’s attention.) 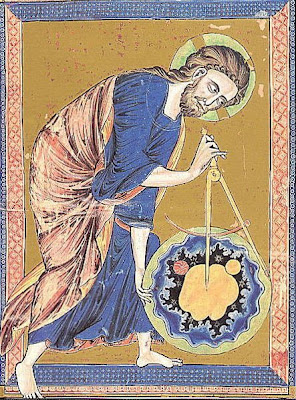 But the idea of God being a kind of cosmic architect predates Freemasonry by even more centuries. Depictions of this nature are found in medieval Christian art. The “Bible Moralisée,” published about 1250 AD, shows God busy at work with compasses in hand.

G.A.O.T.U. was introduced into Freemasonry by Dr. James Anderson, author of the Premier Grand Lodge’s first Book of Constitutions in 1723. A Presbyterian minister himself, Anderson is a theological descendant of Calvin. However, I’d say the credit for making the phrase Masonic vernacular belongs to Albert Mackey who used the term in his groundbreaking list of Masonic Landmarks, which has affected the jurisprudence of our grand lodges since its publication in 1858. And then of course there is the Scottish Rite and its siblings, which employ the term in prayer and ritual. (Photo courtesy GL of British Columbia and Yukon.)
Posted by Magpie Mason at 3:46 PM

If memory serves, the phrase "Grand Architect" was one of George Washington's favorite phrases to describe the Deity.

.
Hey, Magpie!
.
Exactly how prevalent was Masonic membership in the overall American population during the Founding Era?