The Battle Hymn of the Imagined Community

If I understand him correctly, sociologist Benedict Anderson posits that the modern nation-state is too big for everyone to know each other: they share certain assumptions, ideas, ideals and values which unify them into something he calls an "imagined community." And as Anderson notes, it wouldn't hurt to have a song:

“How selfless this unisonance feels! If we are aware that others are singing these songs precisely when and as we are, we have no idea who they may be, or even where, out of earshot, they are singing. Nothing connects us all but imagined sound.”

According to this account in The Atlantic magazine, on September 14, 2001, three days after you-know-what:

[At a] service of prayer and remembrance at the National Cathedral in Washington, D.C., the congregation (which included President George W. Bush and former Presidents Clinton, Carter, and Ford) joined voices to sing Julia Ward Howe's defiant anthem, "The Battle Hymn of the Republic."

Are we a Christian nation? Christianity has argued for nearly 2000 years about what "Christian" is, and the Founding of America decided to leave all that hassling and bloodshed behind, back in Europe.

And what is a nation?

Some say that America is our "social contract," the sum of our laws, the US Constitution, and the Supreme Court's interpretation of it. But the US Constitution, as signed and ratified, permitted one man to enslave another. Surely the Signers and Ratifiers knew that such an obscenity could not stand, that the American society would someday change that constitution.

Because a nation---America---must be more than than its social contract if it is to survive. The history of man proves that governments come and go, but a nation is at its heart a people, a heart, a mind, and in this case, a song, if the song is good enough.

Now, in the Great Civil War, the Confederacy might not have been so much an "imagined" community---the Rebs fought for their states, Virginia, or North Carolina, or Tennessee. The Confederacy was at heart only a military alliance.

However, the Union side certainly was an "imagined" community, the "Union" being an abstraction. Mr. Lincoln said he was a conservative, and his actions were directed only toward preserving the social contract of the US Constitution. As he wrote to Horace Greeley:

Which was Mr. Lincoln's duty as president---to enforce our social contract, the US Constitution.

But at the end of his letter to Greeley, Lincoln confesses his heart:

"...I have here stated my purpose according to my view of official duty; and I intend no modification of my oft-expressed personal wish that all men everywhere could be free."

A quarter-million men fought and died for the Union, some out of vainglory or "patriotism," or money problems or God knows whatever confusions. But as the war dragged on year after bloody year, the abstraction of "the Union" became less compelling even for Abraham Lincoln himself. Still, there was his "oft-expressed personal wish that all men everywhere could be free."

Abraham Lincoln himself might not have been what Jerry Falwell would have called a "Christian," but that all men everywhere could be free was to many of the Union soldiers a Christian sentiment.

According to The Atlantic, the Unitarian abolitionist Julia Ward Howe "had visited a Union Army camp in Virginia where she heard soldiers singing a tribute to the abolitionist John Brown (who had been hanged in 1859 for leading an attempted slave insurrection at Harper's Ferry). A clergyman at the camp, aware that Howe occasionally wrote poetry, suggested that she craft new verses more appropriate to the Civil War effort, to be set to the same rousing tune."

He captured Harper's Ferry with his nineteen men so true
He frightened old Virginia till she trembled
through and through
They hung him for a traitor, themselves the traitor crew
His soul is marching on

Glory, Glory! Hallelujah!
His soul is marching on

John Brown, of course, was what they called then and we call now a "religious fanatic." Still, his extremism as captured in song sparked the hearts of some Union soldiers to fight on, especially in the early days of our great Civil War around 1861, when the Union met with far more defeat on the battlefield than success.

In 1862, Mrs. Howe sent her new words to "John Brown's Body" [which was based on an even earlier melody] to the aforementioned Atlantic magazine. They paid her four dollars, and put her words on the front cover.

And so the Union soldiers came to sing The Battle Hymn of the Republic, as did four American presidents together three days after September 11, 2001: 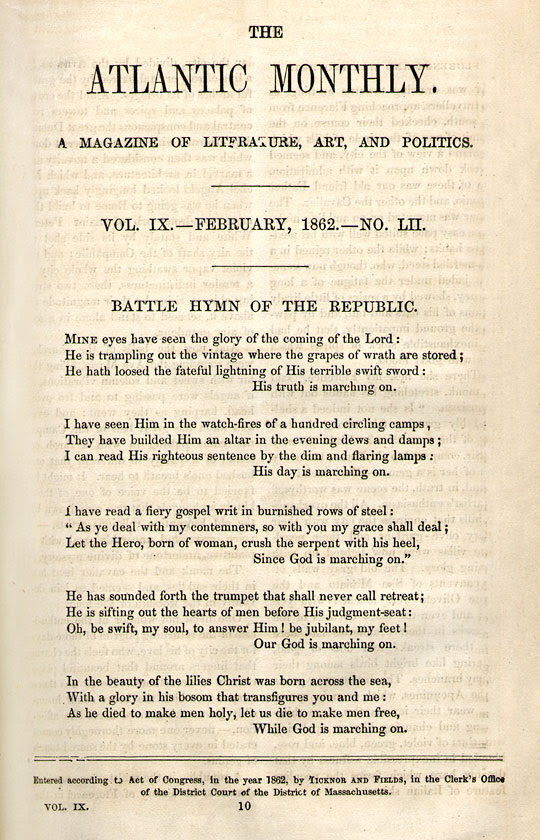 This was the hymn of our Judeo[?]-Christian[?] Nation[?] in the war that ended slavery, and in the Second World War that ended the enslavements and murders of Imperial Japan and Nazism, and was sung during the struggle of the Civil Rights Movement. The Rev. Dr. Martin Luther King quoted Julia Ward Howe's lyrics often in his speeches.

I like "The Star Spangled Banner" and all. It stirs the passions, as America survives the British onslaught. But the soul stirs to hear

His truth is marching on.

...that this nation has some higher reason for being, some greater truth than our toaster ovens and steel-belted radials. I suppose the slaves would have been freed, the Civil Rights Movement would have succeeded, and Barack Obama would be our president today without Julia Ward Howe's words. And what she was talking about might seem quaint or even cleverly demagogic to many folks these days, in this "post-Christian" era. But although America might have started with an idea, what makes an idea live is its song.

The Battle Hymn of the Republic isn't sung much in this enlightened age, but it still comes to our lips now and then. That happens to nations---peoples, "imagined communities," if you will---when the need arises.
Posted by Tom Van Dyke at 12:18 PM

This raises an issue of which we haven't even yet scratched the surface: the political theology of the civil war and the abolitionist movement. Lots of Unitarians were prominent abolitionists.

I used to think that the civil war was the birth of the nation, so I thought that the "Christian Nation" debate was off-topic, arguing about the wrong century.

I have since come to learn about the nascent nationalism of the 18th century, but the case can still be made that the birth of the nation was, in the end, an 18th-century event, that the "nation" was stillborn in the revolution, and the naton we live in today in many ways was indeed forged a century later.

Yesterday at the James Madison Program Event at Princeton, David Forte of the Witherspoon Institute and Professor of Law at Cleveland State University asked me the following? (I think I got 1 out of 3).

Who was our Moses? Answer: Washington.

Who was our Christ? Answer: Lincoln.

Who was our Virgin Mary? Answer: The Statue of Liberty.

Though I never read D. Gertlerner's book on "Americanism." But it sounds like something he would argue; I wonder if that's where it originated.

Whatever author is deleting his comments until he/she gets it right, thank you. I'm confident you'll eventually chime in with something righteous.

I would say that America's "Virgin Mary," the female heart of America's promise and who held America to its promise, would be Harriet Beecher Stowe, Sojourner Truth and perhaps the aforementioned Julia Ward Howe, although this surely misses some worthies.

I'd say George Washington was more like America's Solomon.

I do not believe America had a Christ except for the original. Perhaps it was the Unitarians', the Christian Unitarians' Christ. [Or was it the "Unitarian Christians?" An interesting and perhaps pivotal distinction.]

But Lincoln, sure, if we need a stand-in.

America's Moses? Perhaps the last one we'd suspect, The Impious One, but the one who brought the tablets back from the mountain, the tablets that said that all men are created equal and are endowed by their creator with certain unalienable rights...

Kristo, I would say that the Founding remains the Founding. It's all there. Perhaps it took our women to drag out its promises to their logical conclusions. Women are good at that.

Woman draws her life from man
And gives it back again
And there is love...

Good post, Tom. How about Susan B. Anthony for America's "Virgin Mary?"

I like Washington as the "American Moses." That fits nicely.

The comments about the Civil War bring up a couple good points. First, when does the era of the American Revolution end? I had one professor who argued that it didn't end until 1877 (end of Reconstruction). Another prof. stated that you could extend this all the way until 1963 (Civil Rights). Now, I wouldn't go that far, but I do think that the Civil War era certainly has its ties.

.
.
Anyone who watched last night's episode of "Kings", saw my son who played the role of the jurist that issued the sentences.

The lyric of the Battle Hymn is interesting. It is in most Christian hymnals but it is explicitly Christian only in the sense that it contains some imagery drawn from the Bible. In the Bible much of that imagery depicts Christ. In the Battle Hymn is is the Union armies. The Battle Hymn of the Republic is Exhibit 1 for the thesis that America is a Christian heresy. The many obscure verses support that these, but so do the well know ones for anyone who pays attention to them.

Cool, Brad. I wanted to pick up your "Imagined Community" baton. Seems a reasonable thesis to me.

Per Julia Ward Howe, if America is a "Christian nation," it's probably a Unitarian one. Capital "u," though, like the biblical unitarians who thought "Christ" was something special, as in "He died to make men holy let us die to make men free."

It's all very puzzling, very complicated.

But, there it is.

Very interesting, Phil. It certainly is hard to tell here in the 21st century how widespread the religiousness [I won't use that other word] was, that feeling that God is always watching.

It might be safe to say, a lot more than now.

I see you're becoming influenced by Barry Shain's work. Jonathan tells us Shain's a bit of an outlier among scholars; however, since the balance between rights and duties, and of man as a social animal were pervasive in ancient and medieval philosophy, it also seems safe to say that the radical individualism of today's western world wasn't quite what was going on at the Founding, and that Shain's mining a relatively overlooked and untapped vein.

.
I don't recall that I ever heard of Barry Shain when I first brought up the idea of the pervasive religiosity in Colonial and Revolutionary thinking.
.
Unless a person is prepared to "go against" Shain at his level of scholarship, it's almost impossible to put his proposals down.
.
History, like so many other politically tainted pursuits, has been presented by those people and or groups with some axe to grind.
.
The first thing I remember learning my first year in college was to question authority.
.
Whenever anyone sets their self up as an authority, they should be prepared for the opposition; which, is not to say that they improperly claim authority.
.
We know, today, that for the references claiming something is true, there might be as many to prove it is false.
.
Somewhere along the way we must decide if we'll cut bait or fish.
.
Annuit Coeptis? God approves?
.