Though I might sympathize more with the secular side, there is a certain kind of secular activism which I am squarely against: Trying to purge from public square historic names, seals, flags, whatnot, any vestige of "religion" because such intimates government endorsement of Christianity.

Eugene Volokh noted one such case where the 10th Circuit held that it's constitutional for Las Cruces' City Seal to have three crosses. See the pic. 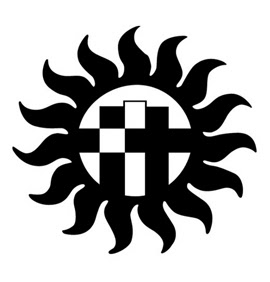 I think the problem is, America, in principle, indeed has a "core value" that really doesn't favor Christianity over other religions, but rather holds all "religion" have an equal place at the table with secular and pagan philosophies. But this value wasn't meant to work itself out this way, where through court litigation all vestiges of religious imagery that could be potentially interpreted as endorsing one religion over another had to be extirpated from the public square.

If you look at America's and Western Civilization's cultural heritage, it's every bit as pagan (chiefly Greco-Roman, but also Anglo-Saxon paganism) as it is Judeo-Christian. Does having the 5th day of the week named after my favorite Deity Thor the Thunder God signify Thor Worship? Or does having the third month of the year named after Mars bringer of war imply we are a Greek God worshipping nation? In America lots of names of public places reflect our pagan Native American heritage; for instance "Kansas" comes from the Kanza Indians which translates as "People of the Southwind."

If we can get the handful of nuisance secularists (it only takes one person to file a lawsuit) to understand these things are the equivalent of Mars and Thor worship perhaps they'd stop filing these silly lawsuits. But we also need to get the religious side to understand America was NOT founded to be a "Christian Nation" in a public or civil sense. They irk the secular side on with their specious "Christian Nation" arguments.
Posted by Jonathan Rowe at 6:19 PM

I think this is a silly post Jonathan. Nobody hearing me say "I'll meet you for lunch Thursday" is going to think that I mean to invoke the grace of a pagan deity.

Similarly, if I you hear me praising San Diego, where we really do have fantastic weather, you're not going to think that my praise is really intended for the Catholic Saint.

Perhaps the cross is meaningless to you. But it still means quite a lot to many of us.

Eric: I suppose this thing might just be in the eye of the beholder. When I see the crosses I see a cool design, something I think would look cool as a tattoo were I to get one, which I probably won't.

If Los Angeles had some official design using angels, I wouldn't think it was a big deal.

Beware, Jonathan, of getting a tattoo -- for scripture condemns them. “You shall not make any gashes in your flesh for the dead or tattoo any marks upon you: I am the Lord.” Leviticus 19:28 (NRSV).

You don’t believe me? Then ask an evangelical fundamentalist: “The Lord plainly, clearly, strongly, and without a doubt – condemns the tattoo.”

Still not convinced? Then ask a Conservative rabbi. Rabbi Alan Lucas will tell you: “In our day, the prohibition against all forms of tattooing regardless of their intent, should be maintained.”

I do worry for your soul sometimes, Jonathan. Truly I do.

If original meaning is irrelevant, as it appears to be with the name 'Las Cruces', then what's objectionable about the crosses? Depending on who you let decide, they could mean anything.

I should say that I did enjoy the tatto crack. But while you're mocking these fundamentalists, be careful that you don't miss why they are wrong though. The original meaning of the text applies as much today as ever.