In a posting from a few weeks back, I presented a map that was originally posted by my graduate professor, Paul Harvey of the Religion in American History blog, which provides a detailed breakdown of the geography of American religion: 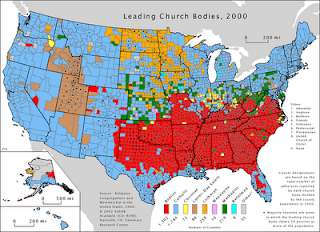 As you can see, the map includes a tremendous amount of detail that illustrates the complex and diverse nature of America's religious landscape.

What struck me about this map was the fact that specific religious creeds are still largely defined by geography. Our modern day religious landscape still contains a number of similarities to the religious landscape of ages past. As we all know, the northern and southern colonies of the 17th and 18th centuries were quite different in their religious practices. And while there is no debating the fact that American religion has changed over the past two centuries, I am amazed at how big of a role geography still plays in determining our religious preferences. 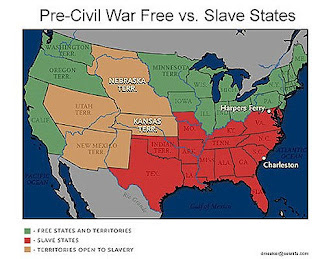 Though there are a few specific differences with the map above, one can easily see some general trends. Clearly the southern and western parts of the United States have been able to maintain some of their cultural and social roots, which has had a profound impact on the religion of their respective region.

Even our voting trends are dramatically impacted by geography. The 2008 electoral map provides at least some general insight into how geography can shape our views:

And while there is no debating the fact that the electoral map changes depending on the issues and candidates of a given election, there is still no doubting that certain geographic areas of the country tend to vote Republican or Democrat based on the social and cultural views of their region.

As I write this, I am reminded of the groundbreaking and controversial work done by historian David Hackett Fischer in his book, Albion's Seed. In this book, Fischer essentially argues that the majority of our social and cultural norms can be dated back to the early British colonization of the "New World." According to Fischer, certain cultural beliefs, which differ from those of neighboring regions in the United States, were the direct result of a particular group of British immigrants, who brought with them their own unique social and cultural beliefs. As a result, these same unique beliefs sprung up in the New World, but were confined to specific geographic regions. As Fischer states:

By 1775 these...cultures were fully established in British America. They spoke distinctive dialects of English, built their houses in diverse ways, and had different methods of doing much of the ordinary business of life. Most important for the political history of the United States, they also had different conceptions of order, power, and freedom which became the cornerstones of a voluntary society in British America.

Today less than 20 percent of the American population have any British ancestors at all. But in a cultural sense most Americans are Albion's seed, no matter who their own forebearers may have been. Strong echoes of four British folkways may still be heard in the major dialects of American speech, in the regional patterns of American life, [and] in the complex dynamics of American life. (Pp. 6-7)

To these categories I would add that America's religious views are determined as well by the social and cultural beliefs of a particular region.

Though much of America's religious landscape has changes over the past 200 years, there is still strong evidence to argue that geography has been the principle determinant of our religious views throughout the course of our existence as a nation.
Posted by Brad Hart at 10:35 AM

Your comments on religion and geography bring to mind that old saying, that "Unitarians believe in the unity of God, the humanity of Jesus, and the vicinity of Boston."