National Monument to the Forefathers 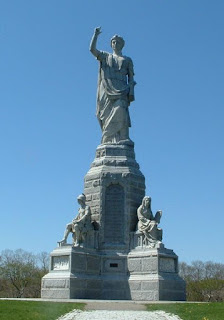 I wanted to follow up on Lindsey's interesting post regarding the place of Plymouth in American memory.

In the video she posted, the commentators are sitting in front of the impressive monument known as the National Monument to the Forefathers. This memorial, which historian James O'Gorman called, "one of the more lugubrious deposits of mid-nineteenth-century American ideals," was erected by the Pilgrim Society in the 1880s (planning began in the 1850s, but things got off track during the Civil War). The monument features a 36-foot tall granite colossus titled, Faith, surrounded by smaller (15-foot) allegorical statues depicting Liberty, Education, Law, and Morality, as well as several relief panels.

This statue is important because it reminds us that much of what we "know" about the Plymouth colonists and their role in founding the country comes from 19th-century efforts to recapture a usable past, not from rigorous historical investigations into the early 17th century. In the mid 19th century, New Englanders were busy fighting a sectional conflict for supremacy over the meaning of America, and one of the best weapons they had in their arsenal was the argument that the Pilgrims founded America on Christian principles. By ignoring those sordid mercenaries in Jamestown and exalting the Pilgrims as beacons of both religious piety and democracy, they strengthened their claim to the legacy of the forefathers, at the same time denying the legitimacy of Southern claims that the spirit of '76 lived on in the South.

This statue is a concrete (granite, actually ;)) expression of 19th-century interpretations of 17th-century history. Imagine what a monumental history of New England would have looked like if authored by Harriet Beecher Stowe. This is it.

The Victorian interpretation of 17th-century American history is still very much with us (it's even on the citizenship exam). I'll bet the average American "knows" 10x more about Plymouth than about any other 17th-century colony and thinks that the Pilgrims profoundly influenced our nation's democratic and religious institutions when they did nothing of the sort. The Mayflower Compact was not a principled clarion call to democracy. The Pilgrims were not big fans of religious toleration (as the intro video at Plimoth Plantation helpfully points out) and held no appreciable influence over any of their contemporaries, they didn't even influence Massachusetts' Congregational practices. Christianity was a major factor in English colonization, but not in the way 19th-c New Englanders thought.

For more on this monument, I recommend O'Gorman's "The Colossus of Plymouth," in The Journal of the Society of Architectural Historians (1995) and James Deetz' The Times of Their Lives: Life, Love, and Death in Plymouth Colony (2000).
Posted by Caitlin GD Hopkins at 12:54 PM

Very well put, Caitlin. This is just another example of how American providentialism has distorted the truth behind American history. Thanks for the post. I am in complete agreement.

Are you serious? You really, really need to go back and take another good hard look at our history. The pilgrims risked their lives to separate from the church of England. They started reading the Bible for themselves. They left at great risk to themselves and their families to spread the Word. They finally came to America after some horrific trials... see the Mayflower Compact (1620) ... "..Having undertaken, for the Glory of God, and advancements of the Christian faith... " Looks like someone else is revising history.

Watch Kirk Cameron's "Monumental - In search for American Treasures" or go to www.monumentalmovie.com to hear the truth of the Pilgrims, their journey, their influence on America and what this statue means. Awesome material! Very credible historians thoughout the movie.

You lack even the most rudimentary understanding of America's historical origins. To state that the pilgrims had little influence on the founding of democracy is obtuse and ill-informed. You need to stop reading modern revisionist history and go back to the original documents, letters, and diaries of the founders.