Fifty years ago today, remembering the important things as these men did, seems longer ago and even farther away with each passing year and to some, even silly. But Merry Christmas to all those here gathered anyway—May we smile today, give thanks, and be inspired in the coming year to perpetuate their silliness... 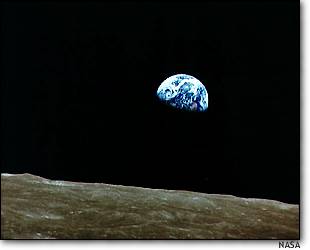 It was on Christmas Eve 1968 that the astronauts of Apollo 8, Frank Borman, Jim Lovell, and Bill Anders, became the first of mankind to see an earthrise from the orbit of the moon, and looking back on us, they spoke these words:


Anders: "We are now approaching lunar sunrise. And, for all the people back on earth, the crew of Apollo 8 have a message that we would like to send to you...


Borman: "And God said, Let the waters under the Heaven be gathered together unto one place, and let the dry land appear; and it was so. And God called the dry land Earth; and the gathering together of the waters He called Seas: and God saw that it was good."

And from the crew of Apollo 8, we close with good night, good luck, a Merry Christmas, and God bless all of you, all of you on the good earth."
Posted by Tom Van Dyke at 2:40 AM

Happy Holidays. I thoroughly enjoyed every bit reading it

Do not use all of these Private Money Lender here.They are located in Nigeria, Ghana Turkey, France and Israel.My name is Mrs.Emily Michael, I am from Canada. Have you been looking for a loan?Do you need an urgent personal or business loan?contact Fast Legitimate Loan Approval he help me with a loan of $95,000 some days ago after been scammed of $12,000 from a woman claiming to be a loan lender from Nigeria but i thank God today that i got my loan worth $95,000.Feel free to contact the company for a genuine financial contact Email:(creditloan11@gmail.com)


Thanks for a marvelous posting! I actually enjoyed reading it, you might be
a great author.I will be sure to bookmark your blog and will
often come back at some point. I want to encourage yourself to continue your great posts,
have a nice day!