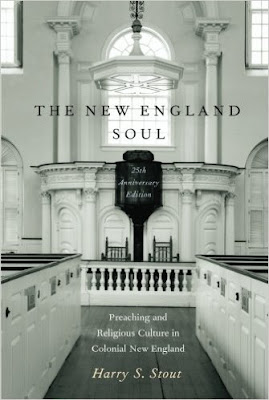 I recently finished reading Harry Stout's book,  The New England Soul: Preaching and Religious Culture in Colonial New England.  Stout, who is a professor of American Religious History at Yale and the author of numerous books on early American religion, focuses on the unique character and evolution of the New England sermon, and how it served as the dominant means by which information was transmitted to the general populace.  Stout argues that no other medium was anywhere as effective in shaping New England thought: "The New England sermon, whose topical range and social influence were so powerful in shaping cultural values, meanings and sense of corporate purpose that even the television pales in comparison."

Stout presents the sermon experience from the perspective of five generations of Puritan believers, beginning with the "Church Fathers" (original settlers) and concluding with the generation of the American Revolution.  Stout argues that each generation maintained a consistent loyalty to the basic tenants of Puritan Christianity, but that subtle changes between generations allowed for a more democratic interpretation of the Congregationalist message.  He writes:

The founders invented a meaning for New England and the children maintained and built upon it.  Third-generation ministers, living in a tolerant "Anglicanized" age, promulgated the same doctrines as their predecessors but adorned them with a "polite" style that registered the influence of English manners and the "New Learning."  Forth-generation ministers, spanning the years of religious "awakening" and war with France, learned anew the importance of delivery both in theory and fact.  Finally, fifth-generation ministers, living through Independence, built their case for resistance and revolution on the memory of the founders and New England's inherited covenant mission.

In short, what Stout argues is that there was far more cohesiveness on the part of Puritan preachers of successive generations that there was division.  The natural evolution of Puritan theology was more a symptom of inevitable change and development than proof of spiritual decline.  Again from Stout:

If there was a "decline" and resultant "secularization" of Puritanism, it was not evident in the regular life of the churches.  The majority of inhabitants continued to go to church, and their ministers persisted in the same subject matter of their sermons.  No shift from piety to moralism was evident.  Indeed, it appears that models of secularization stem from historians' failure to appreciate the functional distinctions made by colonial ministers...The more one reads these sermons the more one finds unsatisfactory the suggestion that ideas of secular "republicanism," "civil millennialism, or class conscience "popular ideology" were the primary ideological triggers of radical resistance and violence in Revolution [my emphasis].

This is, in my opinion, the most compelling argument Stout makes. It is easy for even a successful historian to get lost in the fog of emerging Enlightenment doctrine that helps to make this era of history so appealing.  We naturally want to gravitate to the "new" ideas of Isaac Newton, Locke, etc.  Stout, however, would advise caution.  While Enlightenment ideas were no doubt prevalent and growing, the Puritan message was not going out of style.  As Stout himself aptly puts it, "Anglicanization, in short, gilded the face of New England society, but did not transform its soul."

None of this suggests that the Puritan message remained completely untarnished or free from change.  The rise of new scientific sensibilities, the debates over natural religion, and other emerging counterarguments left their mark on the New England countryside.  But these new ideas were not seen as fatal blows to the Puritan mindset.  Most Puritan ministers were effective in their ability to reconcile divine revelation (as any Congregationalist community saw it) with the "new science" of their day.  So long as this new thinking did not upset the world of Reformed Christianity or minimized the importance of Sola Scriptura, these challenges were not as scary as they may first appear.

When dissent did arise over matters of theology in New England it was usually to do with issues that had little to do with new Enlightenment principles.  The "Great Awakening" is a perfect example.  With the rise of Jonathan Edwards and George Whitefield came a new emphasis on the individual conviction of salvation by Christ as opposed to the traditional Congregationalist conversion experience that relied more on hierarchy and ceremony.  But this change (which would give birth to the Old Light v. New Light battle) had more to do with the FRUITS of conversion than it did with any actual challenge to church authority.

And though I found Stout's book to be both informative and compelling, there are a few areas of concern.  First, it would be easy for the casual reader to assume that the Puritan message was the dominant message of Colonial America.  New England, rightfully so, received a tremendous amount of credit for being the soil in which revolution was allowed to germinate.  With that being said, it is important that we keep in mind the many other factors that led not only to revolution but allowed each colony to develop on its own.  Puritanism, though a powerful force, was not the only big kid on the school yard.

In addition, I would have enjoyed hearing Stout's take on the emergence of preachers like Jonathan Mayhew and how his brand of preaching proved challenging to traditional Puritan Christianity.  With that being said, I was overall pleased with the book.  It's worth the time.
Posted by Brad Hart at 2:53 AM

And though I found Stout's book to be both informative and compelling, there are a few areas of concern. First, it would be easy for the casual reader to assume that the Puritan message was the dominant message of Colonial America. New England, rightfully so, received a tremendous amount of credit for being the soil in which revolution was allowed to germinate. With that being said, it is important that we keep in mind the many other factors that led not only to revolution but allowed each colony to develop on its own. Puritanism, though a powerful force, was not the only big kid on the school yard.

Excellent analysis, B. Wouldn't want to build a bridge too far for Presbys, and overstate the case, but we certainly agree that a bridge too far has been built by the secularists glorifying the Enlightenment.

The vast majority of the colonists were religious--Christian, Protestant, even Calvin-influenced--more than "Enlightenmentalists." That was the elite, like Jefferson, who mostly kept his anti-Christianty under wraps.


Outside of New England, they were more Anglican/Episcopal than Presbyterian, true.

got his library thrown in the river by the people of Savannah, Georgia. Members of the Church of England were understandably ambivalent about the revolution--the Anglican clergy swore an oath to the King--but the Presbyterians [and the Baptists were also all Calvinists back then] had no duty to the English crown on any level.

Christ is our king!

Brad . . . Stout argues that no secularization of Puritanism took place in the churches. (I am not up on the historigraphical issues in the boldfaced section of your post.) Does Stout address secularization of life OUTSIDE the churches? That seems just as consequential--when people no longer understand their day to day affairs within their religious worldview. That's when Puritans--people devoted to creating a "city upon a hill" become Yankees--people shrewd at making money.