The Gift of the Thing Not Done 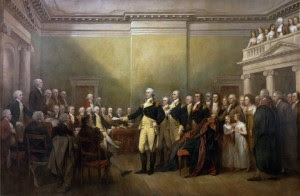 “General George Washington Resigns his Commission” by John Trumbull. Courtesy US Capitol
On this day in 1783, George Washington resigned as Commander-in-Chief of the Continental Army following the American victory in the Revolution. Speaking to Congress, assembled at Annapolis, Washington said:

“Having now finished the work assigned to me, I retire from the great theatre of action; and bidding an affectionate farewell to this august body, under whose orders I have so long acted, I here offer my commission, and take any leave of all the employments of public life.”

This is quite possibly the most significant resignation in history.
This was a path so well-trodden in history as to almost be expected: Following a great national uprising, the people, whether in the form of assemblies or otherwise, prove unable to manage affairs of state, and a great man, often the leader of the rebellion, feels compelled to step in. The classic example for Washington and his peers, who were raised as Brits, would have been Cromwell’s dissolution of the chronically incompetent Long Parliament. But Washington also knew that the pious soldier had been corrupted, like so many before him, by the power he had seized.
The Confederation Congress did not improve after Washington’s resignation; in fact, an entirely new system was called for to replace it. But by refusing to do the short-term, expedient thing and take supreme power, Washington gave the fledgeling nation space to develop institutions that went beyond one man. It was perhaps the greatest Christmas gift this nation has ever received.
Posted by Tom Van Dyke at 6:25 PM

A great act by a great man.

His retirement from power had a profound effect everywhere in the Western world. It was extraordinary, it was unprecedented in modern times—a victorious general surrendering his arms and returning to his farm. Cromwell, William of Orange, Marlborough—all had sought political rewards commensurate with their military achievements. Though it was widely thought that Washington could have become king or dictator, he wanted nothing of the kind. He was sincere in his desire for all the soldiers “to return to our Private Stations in the bosom of a free, peaceful and happy Country,” and everyone recognized his sincerity. It filled them with awe. King George III supposedly predicted that if Washington retired from public life and returned to his farm, “he will be the greatest man in the world.”

Washington was not naive. He was well aware of the effect his resignation would have. He was trying to live up to the age’s image of a classical disinterested patriot who devotes his life to his country, and he knew at once that he had acquired instant fame as a modern Cincinnatus. Washington was a living embodiment of all that classical republican virtue the age was eagerly striving to recover. As Gary Wills has so nicely put it, Washington gained his power by his readiness to give it up.

Wow, the earth must be tilted upon its axis -- finally, a post by TVD that I can cheer ;D

Nice to hear from at least two of you, and a Merry Christmas to all.