The Men Who Lost America [?]

Don't miss David Moore's excellent interview of Andrew O’Shaughnessy on The Men Who Lost America (Yale, 2013), hosted over at Tommy Kidd's groupblog, The Anxious Bench. A few riffs that caught my eye: 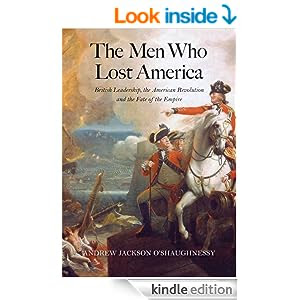 Moore:  It seems incredible that the British lost the Revolutionary War given their military superiority.  Many have concluded that it must have been due to incompetent leaders, but you want to challenge that popular notion, correct?

O’Shaughnessy: This is correct.  The idea that it was lost by incompetent leaders is most apparent in movies and the popular media which have much greater influence on public opinion than books.  It even permeates popular history and college textbooks. It should be said that such images were if anything more common in Britain.  It is a curious thesis because it diminishes the achievements of patriot leaders in winning the war.
____

Moore:  Your chapter on George III rehabilitates him in a big way.  There is much to like about King George III.  Among other things there is his character and intellectual curiosity.  Do you think his legacy among Americans will change as more is learned about him?

O’Shaughnessy: The reader will indeed find many attractive qualities in George III. George III was not a tyrant who was responsible for the policies that led to the American Revolution.  He had little to do with colonial policy.  However, after the Boston Tea Party, he became the leading war hawk and may actually have helped to perpetuate the war by several years.  He wanted to continue after Yorktown.  It was revelation to me that he felt so passionately that Britain would cease to be a great power if it lost America.
________________

Moore:  What were the views among Parliament with respect to the Boston Tea Party?

O’Shaughnessy: The Boston Tea Party helped to unify all parties in favor of punishing Massachusetts.  It was regarded as violation of private property and an overt act of civil disobedience.  It should be remembered that many future patriots disowned the radical behavior of Boston.  Benjamin Franklin even offered to compensate Britain.
__________________


Moore:  In speaking about the French Revolution, Lord North predicted the “anarchy and bloodshed which will soon overwhelm that unhappy country.”  What gave him the ability to make such a prediction?

O’Shaughnessy: Lord North was not alone in predicting the blood baths of the French Revolution.  It was Edmund Burke who most famously predicted that it would end in dictatorship in his Reflections on the Revolution in France.  Burke is often seen as a father of modern conservatism because of his belief that society should change organically rather than radical change which would destroy the fabric of the state.

Moore:  Cornwallis was willing to pay for various war expenses out of his own pocket.  Not only does this showcase his generosity, but does it not also demonstrate how convinced he was that the British were on the right(eous) side of the war?

O’Shaughnessy: Cornwallis had actually opposed the policies which led to the war in America.  He was one of only six members of the House of Lords to vote against the Stamp Act.  However, he was very much the professional military man who believed he should obey orders regardless of his personal feelings.
____________________

Moore:  You rightly mention the stellar character of George Washington.  No one is perfect of course, so I am curious what you think about him not helping Paine out later on when Paine had helped Washington so much?

O’Shaughnessy: The change of attitude towards Paine was largely because of his atheism and his book The Age of Reason.  Paine was a permanent revolutionary who supported the opposition to Washington in the 1790s.  He was much more radical than the general and famously derided the president in an article which made the breach permanent.

Washington fell out with those revolutionary leaders who joined the Republican opposition to his government in the 1790s.  It was a bitterly partisan decade not least because each party believed that it alone represented the true spirit of the American Revolution.  They thought that their opponents would destroy America.  It is a lesson for us today because the country has been enriched by both these traditions even though they were often in conflict.
___________________________

As they say, read the whole thing.

I concur with O’Shaughnessy’s perspective that, “The problem of the almost comical popular image of these men is that it deflects from understanding the real essence of this war and makes it seemingly less interesting.” When I glanced through the book at a local “brick and mortar” store, I also liked the opening epigram from Thomas Paine, ““Your failure is, I am persuaded, as certain as fate. America is above your reach. She is at least your equal in the world, and her independence neither rests upon your consent, nor can it be prevented by your arms. In short, you spend your substance in vain, and impoverish yourselves without a hope.” To the People of England (1774)

But, I did not like the book’s organization. Each chapter is a mini-bio of some important British civilian or military leader. And yes, they are “interlinked” by the author, but it had no narrative flow that would have made it more of a compelling read.

I prefer The Long Fuse: How England Lost the American Colonies, 1760-1785 by Don Cook. Cook analyzes the American Revolution from the British perspective and concludes that “with a more conciliatory policy, England might well have reached an accommodation that would have kept the American colonies in the British Empire. “

Thanks for your review, JMS.

To that last bit, England had always treated her colonies abominably [India, Ireland]. I wonder if a commonwealth-type mutual respect was ever possible in the 1700s.