Aristotle, Aquinas, Locke, and the American Founders?  Yup.  Such a heavyweight lineup! Let's get to it:


After finishing Thomist philosopher Edward Feser's The Last Superstition: A Refutation of the New Atheism, a friend wrote:

"Feser argues the moderns ruined Aristotelian-Thomistic philosophy by basically assuming, without argument, that we could engage in science and philosophy without a metaphysic, without a telos.  Does this apply to our Founders?  To ?  We conservatives take refuge that, for all the ravages of 19th and 20th century pseudo philosophy and political theory, our founding at least was pure.  Would Feser agree?  Or would he argue that even our founding was poisoned by the modern zombified anti-Aristotelian-Thomistic conception of a soulless, purposeless man?"


Since Feser also wrote a philosophical biography of John Locke, yes, I would say so, at least per Jefferson, who is rather soulless. .  Reviewer Irfan Khawaja wrote:

"Two of Feser‘s criticisms stand out for their subversive potential: (1) Locke‘s skepticism about our knowledge of real essences undermines what he has to say in defense of natural rights… (2) The defects in Locke‘s theory of personal identity undermine his justification of private property… These criticisms, and others like them, should force us to think more carefully about the relationship between Locke‘s "Essay Concerning Human Understanding" and his political works, and will undoubtedly keep Locke scholars busy for some time.


Feser ends the book… with a provocative chapter on “Locke‘s Contestable Legacy.” One bonus of the discussion is a very interesting (and in my view, correct) application of Locke‘s views to international politics in the post-9/11 world... Feser‘s main point, though, is that taken as a whole, Locke‘s philosophy offers us a package deal of incompatible elements, so that “[t]hose who seek to appropriate Locke‘s legacy today must decide which part of it they value most, for they cannot coherently have it all”... Even if one thinks, as I do, that Feser occasionally lets his Scholastic polemics overshadow his examination of Locke‘s theorizing, he is right to push the reader to some such decision. Whether such a reader will be pushed from Lockeanism to Feser‘s Scholasticism is another matter, but there‘s no question that some pushing is in order, and that Feser‘s Locke does an excellent job at supplying it."

Now, my own studies of religion and the Founding have led me to the strong Calvinistic influence, which runs on a rather parallel track, and non-creedally--call it "Judeo"-Christianity--"Providence" stands in for telos [the ultimate human purpose] quite well, "Providence" being almost universally accepted by the Founding generation, including the "questionably Christian" Ben Franklin and the studiously non-creedal Geo. Washington.

"In the beginning of the Contest with G. Britain, when we were sensible of danger we had daily prayer in this room for the divine protection.- Our prayers, Sir, were heard, & they were graciously answered. All of us who were engaged in the struggle must have observed frequent instances of a superintending providence in our favor...

"I have lived, Sir, a long time, and the longer I live, the more convincing proofs I see of this truth- that God Governs in the affairs of men. And if a sparrow cannot fall to the ground without his notice, is it probable that an empire can rise without his aid?"---, call for prayer at the Constitutional Convention

"[I]t would be peculiarly improper to omit in this first official act my fervent supplications to that Almighty Being who rules over the universe...

No people can be bound to acknowledge and adore the Invisible Hand which conducts the affairs of men more than those of the .

Every step by which they have advanced to the character of an independent nation seems to have been distinguished by some token of providential agency; and in the important revolution just accomplished in the system of their united government the tranquil deliberations and voluntary consent of so many distinct communities..."--GWash, 1st Inaugural


Still, some historians say that certain clever secular-Enlightenment Founders put a Lockean "poison pill" in the Constitution, which leaves out all mention of God.  The bible for that is and Kramnik's "Our Godless Constitution."

Yay!  However, because Jefferson and 's Virginia held a virtual veto over any God-talk [with the assent of the third-place Baptists, sucking hind teat behind the Episcopals and Presbyterians], religion was simply left to the states. Today, few Americans know that the other 12 states kept their religious tests for [statewide] office, and virtually every state constitution mentions God.

In these discussions, those of the secular bent want to define these as the Constitution, no more and no less.  And once we agree to play on their home field, they usually win.  Even if you survive the Founding, incorporating the 1st Amendment via the 14th (Torcaso v. Watkins [1961]) means it's Game Over.

But that's not exactly how it all went down, and it's not what still keeps us ticking: 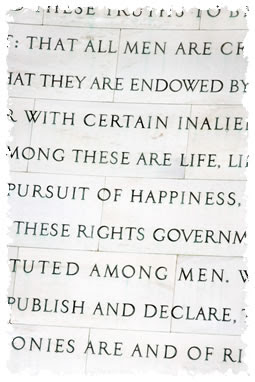 If your rights aren't "endowed" by some higher power, then your "rights" are only whatever you can wrest and wrangle from your government.  And what the Founders knew, and what all men come to realize, is that whatever your government gives, it can also take away...

Good book covering "providential thought" from a host of original sources. It permeated the nation and the nations leaders.

Of note: both Washington and Rush, in private correspondence, thought only "infidels" could deny the providential happening during the revolution (p.108).

Of note: both Washington and Rush, in private correspondence, thought only "infidels" could deny the providential happening during the revolution (p.108).

Thx, PolymathisPerson. Exc stuff. Since the original letters are available online, if you could provide the dates of the letters, everybody could have access to them with no further ado.

This American Creation blog--when not d-bagging on David Barton---is big on the original documents. Unfortunately, there's no Google preview to track down p. 109 of

Here are two quotes from Washington in that regard:

“The hand of Providence has been so conspicuous in all this, that he must be worse than an infidel that lacks faith, and more than wicked, that has not gratitude enough to acknowledge his obligations, but, it will be time enough for me to turn preacher, when my present appointment ceases”

“I am sure there never was a people, who had more reason to acknowledge a divine interposition in their affairs, than those of the United States; and I should be pained to believe that they have forgotten that agency, which was so often manifested during our Revolution, or that they failed to consider the omnipotence of that God who is alone able to protect them.”

Thank you wsforten. I'll see if I can find the Rush quote.

I cannot readily find the letters of Rush online. I suppose if I were serious enough I'd check out my local college library. We shall see.

I have not been able to locate the quote from Benjamin Rush, but if you could post his exact statement, I might have a little more success.

Ah, I see. Sorry, the book did not give a quote for either man, just references.

If I had the quote I'd be using google, google books, etc. too.

I found the Sept 24 letter here

My dear Sir, — I have not been unmindful of you since we parted.
No man rejoiced more than I did in hearing of your gallant behavior
at the Three Rivers, and General Sullivan can witness for me that
when He repeated any anecdote that related to our Army in Canada
in which your name was mentioned with respect, I felt, and showed
the same satisfaction that I should have done had he been lavishing
encomiums upon a brother.

My seat in Congress has subjected me to many cares to which I
was a stranger when my whole business consisted in reading — writ-
ing — & feeling pulses. — I am obliged daily to hear the most melan-
choly accounts of the distresses of our troops from wants of every
kind — I have felt a large share of the pain & shame brought upon
our arms by the desertion of Long Island, and evacuation of New
York. The military spirit of our country men seems to have sub-
sided in that part of the continent, and a torpor seems likewise to
have seized upon the citizens of America in general. I apprehend we
have overrated the public Virtue of our country. If this is the case,
let us not repine at misfortunes — They are necessary to the growth
& existence of patriotism. History shows us that States like in-
dividuals have arisen to importance only when their foundations
were laid in difficulties & adversity. We received so many pledges
during the last Campaign of the favor and protection of Heaven
that it would seem a species of infidelity to doubt our success in
the issue of the present controversy.
________________________________
A convention has at last formed a government for our State.
Herewitli I send you a copy of it [Constitution of 1776], It is tho't
by many people to be rather too much upon the democratical order,
for liberty is as apt to degenerate into luxuriousness, as power is
to become arbitrary. Restraints therefore are as necessary in the
former as in the latter case. Had the Governor and Council in
the new constitution of Pennsylvania possessed a negative upon
the proceedings of the assembly, the government would have
derived safety — wisdom & dignity from it. But we hope the Coun-
cil of Censors will remedy this defect at the expiration of seven
years.

My present situation requires that I shou'd possess a thorough
knowledge of the state of the armies of the Continent. Let me beg
of you therefore to furnish me every week (if possible) with the
history of every material occurrence in the Northern department.
Tell me all your wants whether they relate to provisions, clothing,
tents — ammunition or medicines — I could wish you would go fur-
ther, & inform [me] what officers, and what brigades, or regiments
stand highest with you for courage — conduct, and military discipline.
Duty & inclination will prompt me to do every thing in my power
to remedy abuses — correct delays — and reward merit of every kind
in the Army.

My Comp'ts await Gen'l Gates, and Gen'l St. Clair. Tell the latter
that I have done nothing since I took my seat in Congress with
greater pleasure than giving my Vote for making him a Brigadier
and I wish for nothing more than to do the same justice to the merit
of my friend Col: Wayne. Inter nos — an attention in you to Gen'l
Gates may facilitate this matter if it should soon come before Con-
gress.

Adieu, my dear Anthony, God bless you ! & bring you back in
safety to our native province in which I hope to spend many days
with you in the enjoyment of that freedom for which we are both
making sacrifices in the cabinet & field.

Impressive.You're my research hero (for now).