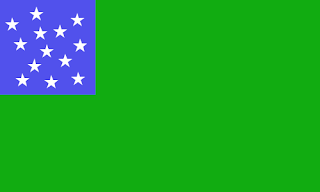 On this day in 1777, the great state of Vermont decided to declare its independence not only from Great Britain but from the neighboring state of New York as well. For years, the settlers in the Vermont area had been asserting their right to break from New York, but were unable to do so. Thanks in part to the efforts of Ethan Allen and his "Green Mountain Boys," Vermont was able to finally able to gain its independence and maintain a relatively neutral stance during the American Revolution.

Origionally named New Connecticut, the state's delegates chose to adopt the new name of Vermont, which is an inaccurate translation of the French phrase "green mountain."

Vermont was also the first state to draft an official constitution. Its constitution was one of the most radical to say the least. It guaranteed every male (reguardless of property status) the right to vote, it abolished slavery (making Vermont the first state to do so), and it gave some rights (mostly property rights) to women. Despite their incredible efforts to gain independence, Vermont was finally incorporated into the United States in 1792, making it the first state outside of the original thirteen colonies to join the union.

The origional flag of Vermont was the same flag that was used by Ethan Allen and his Green Mountain Boys (a picture of the flag is posted at the beginning of this article). The flag has 13 stars in a scattared pattern, which was to represent the scattered and unsettled nature of the early United States. The green color is, of course, representative of the Green Mountains of Vermont.
Posted by Brad Hart at 5:04 PM

.
Brad, thanks for that short but informative piece on Vermont. It is especially interesting to me as my ancestors landed in Connecticut around 1710, and moved up into Vermont sometime before the Revolution.
.

William Hogeland, in Declaration, discusses Thomas Young's apparent role in the naming of Vermont. Apparently, he and Ethan Allen were acquainted, so to speak.

An aside: I find that Declaration is a really good fit with T.H. Breen's American Insurgents, American Patriots: The Revolution of the People in as far as being a people's-eye view of the action. Both are contra the heroic Big-Name version of the usual historical accounts. I'm sure a lot of people here have at least read reviews at John Fea's place or at Boston 1775.