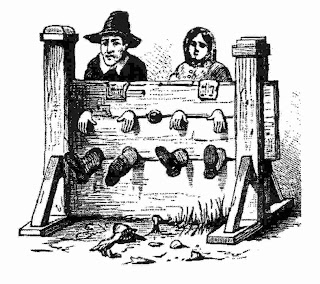 Colonial law books governing the morality of sex are vast to say the least. Early Puritan leaders were instrumental in establishing a codified system of laws that governed sexual morality, and provided a guideline of what was considered "acceptable" and what was considered "immoral." Along with these laws were the specific punishments that accompanied a particular "immoral" act. For example, bestiality and homosexuality were punishable by death. In fact, the first recorded execution in Massachusetts is that of a young man that was charged with "carnal lust" with animals.

The reason I bring up this law is because it illustrates an important aspect of American colonial society. Sexual deviance, though common in America throughout the colonial period, carried a strong religious condemnation that was very real for many people. Just look at the case of Joseph Moody. In the William and Mary Quarterly, Vol. 60, No. 1, historian Brian Carroll discusses how religious beliefs regarding sex impacted colonial society. In Moody's diary are written the following entries:

Thurs. [July] 19 [1722 ]. This morning I got up pretty late. I defiled myself, though wide awake. Where will my unbridled lust lead me? I have promised myself now for a year and a half that I would seek after God, but now I am perhaps farther away from him than ever before.

Mon. [April] 13 [1724 ]. Pretty Cold; wind from N. W. to S. fine weather. . . . I dined with the doctor and schoolmaster Abbott. Then with the doctor I called on Captain and Ensign Allen. I stayed up with my love not without pleasure, but I indulged my desire too freely, and at night the semen flowed from me abundantly.

The overwhelming sense of guilt that plagued Moody's soul gives us valuable insight into the moral mindset of colonial America. Even if sexual promiscuity was a common occurrence (and it most certainly was in colonial America), there were others who felt deeply about god's moral judgments that awaited them in the life to come.
Posted by Brad Hart at 7:19 PM