"So Help Me God" Has a Complicated History in Military Oaths

Earlier this month, over at the Americans United website, Simon Brown wrote an article, Oath Offense? The Long Complicated History of SHMG In The Military. It’s basically a good article except for one missing detail, where the author simply writes:

To see more about these “minor changes,”  here is the Oath of Allegiance, as presented by the U.S. Army Center of Military History website, Oaths of Enlistment and Oaths of Office,  to which the author, and many others, most commonly refer:

The revised version, voted 3 February 1778, read "I, _____ do acknowledge the United States of America to be free, independent and sovereign states, and declare that the people thereof owe no allegiance or obedience, to George the third, king of Great Britain; and I renounce, refuse and abjure any allegiance or obedience to him: and I do swear (or affirm) that I will, to the utmost of my power, support, maintain and defend the said United States, against the said king George the third and his heirs and successors, and his and their abettors, assistants and adherents, and will serve the said United States in the office of _____ which I now hold, with fidelity, according to the best of my skill and understanding. So help me God."

The missing detail, I’m talking about, is the fact that the religious codicil, so help me God, which appeared in the original version, does not  fall within the delimiting pair of quote marks. It actually followed the last quote mark. The U.S. Army Center of Military History website got it wrong.

If this pair of quixotic quote marks was all there was to notice, this rarely noticed detail could easily be overlooked, There is, however, much more to the story that needs to be told, because three months later the Continental Army under the Command of General Washington, without any explanation, left out the so-help-me-God tagline from the Officers' Oath. This can be seen by referring to the General Orders of General Washington of May 7, 1778, and the oath certificates that were distributed to the field. Another reference can be seen at the National Archives - Founder Online webpage - Lieutenant Colonel and his Aide De Camp to His Excellency The Commander in Chief (see handwritten version by clicking on IMAGES).

And here, to add a note of emphasis, is the image of the May 12th, 1778, oath certificate as signed by George Washington where the So-help-me-God tagline is absent: 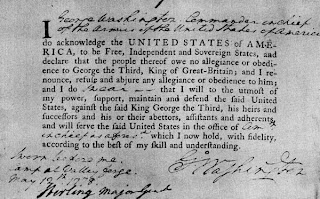 Early in February, 1778, [the Continental] Congress agreed to a new loyalty test for all federal civil and military officers to swear:
"I --------- do acknowledge the United States of America to be free, independent and sovereign states, [dot – dot – dot].”

Since Congress particularly feared treason in high military office (eleven of the twelve generals had formerly held royal commissions, and three were English-born Royal Army veterans) it required that nonjurors be cashiered, forfeit two months' pay, and face perpetual exclusion from government service. Optimistically, Congress required all officers to subscribe the new test within twenty days of its proclamation. Washington had more pressing martial duties. Only after repeated importunities from Congress, and the threat of restricting post-war pensions  to those who signed immediately, did Washington finally sign the new oath himself and arranged for his subordinate officers to affirm their loyalty. Washington assembled his generals and all signed except the unpredictable Charles Lee, who hesitated at renouncing the Prince of Wales. Lee finally signed. Benedict Arnold was absent, but signed later.

The spring months of 1778 witnessed successive swearing ceremonies at Washington's belated but urgent orders impelled subordinate officers to repeat the new formula of loyalty. In fact, the process went too quickly, and supplies of the oath forms ran out. Special messengers hurried new stocks to Washington's headquarters a half-dozen times and still could not keep up with the demand. Other administrative complications ensued because of deficient camp communications to men on leave, in scattered outposts, or in hospitals. Washington appointed special officers in his provost corps to travel from Canada to Georgia administering the oaths, so none of his officers should incur the financial penalties of innocent nonjuring. The momentous events then occurring made loyalty-testing a requirement a vexatious, time-consuming detail.

Ray - thanks for your first-rate research.