Where Did Groundhog Day Come From? 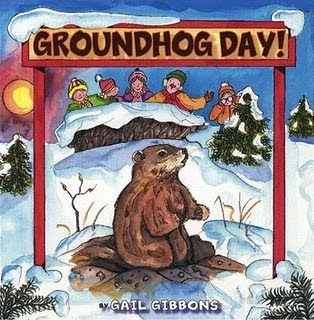 Groundhog Day is upon us and the only question left is will Punxsutawney Phil see his shadow or will he free us from winter's grasp? Yes, the meteorological fate of the planet rests in the hands (or paws) of this furry little Pennsylvania woodchuck!

But where does Phil get his amazing powers? How did the idea of a groundhog predicting the weather come to be? Truth be told, good ol' Punxsutawney Phil has quite a heritage that is older than Pennsylvania itself.

As is the case with many of the holidays and festivals we enjoy today, Groundhog Day is littered with pagan culture. And as is the case with most pagan festivals, the emphasis on the seasons and weather take a front seat. In the Celtic world, right around the time that Christianity was in its infancy, the celebration of Imbolc was becoming a popular pastime. Imbolc was hailed as a popular day of weather prognostication where spectators anxiously watched to see if badgers or serpents would emerge from their winter shelters, thus predicting spring's impending arrival. This popular Gaelic proverb helps to capture the importance that early Celtic societies placed on Imbolc:

The serpent will come from the hole
On the brown Day of Bride,
Though there should be three feet of snow
On the flat surface of the ground.

In addition to its emphasis on weather, fire and light played an important role in various purification rituals during Imbolc. In many northern Celtic lands, the holiday also celebrated Brigid, the goddess of healing and wisdom. Celts believed that Brigid, if pleased, would bring the first stirrings of spring and liberate society from the clutches of harsh winter. It was through animals (usually a badger or a bear) that the will of Brigid was made manifest, which is why people would gather in almost every village to see if these "holy animals" would emerge or not. In addition, villagers also closely watched the skies. If the day of Imbolc (February 2) was clear, that meant that Brigid had created a pleasant day for herself in order to gather additional firewood for a long winter. If the day was cloudy, snowy, etc. it meant that springtime was around the corner. 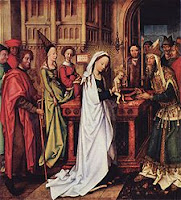 With the emergence of Christianity, most pagan holidays, including Imbolc, were either forced out or adapted to fix the new dominant faith of the region. For the festival of Imbolc, the Catholic Church brought about the celebration of Candlemas, which was created to be a commemoration of the presentation of Jesus at the temple and the purification of Mary (to read the biblical account of Jesus' presentation at the temple see Luke 2: 22-39). This day (Feb. 2) became the conclusion of Christmastide, since Feb. 2 is 40 days after December 25th.

To add a further measure of credibility to the holiday, early Christians canonized St. Brigid, who is one of the three patron saints of Ireland and whose feast day fell on Candlemas. It is important to point out that St. Brigid is NOT the Brigid of Celtic folklore. St. Brigid was a real woman who became an influential nun of the 5th century BCE. Obviously, the coincidence of St. Brigid and the Celtic Brigid sharing the same holiday was not lost on early Christians who used the canonization of St. Brigid to eradicate the Celtic version.

In addition to the introduction of St. Brigid, Candlemas adopted the Imbolc usage of candles. On this day it became tradition for priests to light and dedicate candles in the dark of winter to symbolize the hope of spring's rapid return. Candlemas itself was seen as a day to predict weather. If the weather was fair and clear on Candlemas it meant that winter was sure to linger on. If the weather was cloudy and snowy then spring was just around the corner. Obviously this was an adopted Imbolc custom that made its way into early Christian culture. An old Scottish couplet helps to capture the feeling of this day:

"If Candlemas Day is bright and clear, there'll be two winters in the year."

So what does this all have to do with Groundhog Day?

It's relatively simple. The colonization of many parts of Pennsylvania by German settlers, who eventually became known as the "Pennsylvania Dutch" (it's worth noting that the term "Pennsylvania Dutch" does not mean the settlers were of Dutch ancestry, rather it's a corruption of the German word "Deutsch") brought with them to the New World many of their customs and beliefs, Candlemas being one of them. And since the traditions of Imbolc were embedded in with Candlemas, it was natural for these settlers to look for the same traditional weather signs (i.e. animals and weather patters) that they had embraced for centuries. The importance of the Candlemas/Imbolc tradition on the modern American Groundhog Day should not be overlooked. As one popular New England song of the 18th century put it:

So why did the groundhog become the accepted animal of choice to become the "prognosticator of prognosticators?" The reason may be as simple as the fact that groundhogs were in abundance in colonial Pennsylvania at the time and are easier to deal with than badgers. With that said, there is another possible explanation as to why these early settlers chose the groundhog. The Delaware Indians, who settled many of the western lands of Pennsylvania in the early years of the 18th century, revered the groundhog as a sacred animal. In fact, they considered the groundhog to be the reincarnation of their honorable ancestors who had returned to earth. These Native people established several camps in the area including one they called "Punxsutawney." The very word, "Punxsutawney" comes from the Indian "ponksad-uteney" which means "the town of the sandflies." In addition, the word "woodchuck" (a woodchuck is the same animal as a groundhog) comes from the Indian word "Wojak." The religious beliefs of the Delaware Indians suggested that a "Wojak" was in fact the ancestral grandfather of their tribe. As a result, groundhogs were revered with great respect.

So colonial America clearly embraced the Imbolc/Candlemas festival. But when did it become "Groundhog Day?" The first official record of Groundhog Day being celebrated in America comes from the diary of one James Morris who was a shopkeeper in western Pennsylvania. On Feb. 4, 1841 he wrote:

Last Tuesday, the 2nd, was Candlemas day, the day on which, according to the Germans, the Groundhog peeps out of his winter quarters and if he sees his shadow he pops back for another six weeks nap, but if the day be cloudy he remains out, as the weather is to be moderate.

The first official celebration of Groundhog Day as a holiday took place on Feb. 2, 1886. In the local newspaper, The Punxsutawney Spirit, editor Clymer Freas wrote:

Today is groundhog day and up to the time of going to press the beast has not seen its shadow.

On that same day, the official groundhog was given the name "Punxsutawney Phil: Seer of Seers, Sage of Sages, Prognosticator of Prognosticators, and Weather Prophet Extraordinary" and his hometown dubbed "The Weather Capital of the World."

So what is Punxsutawney Phil's track record? Well, if you're a warm weather fan you won't be pleased. In the 122 year history of Phil predicting the weather he has seen his shadow 98 times compared to the 15 times he did not (9 years have no record as to what Phil predicted). As a result, roughly 85% of the time Phil declares an additional 6 weeks of winter. But do not fear my fair weather friends. The National Climatic Data Center states that Phil has been correct in his predictions only 39% of the time.

This is an excellent article. I plan to pass it along to friends who enjoy both history and weather lore. Below is a copy of a portion of a response to an email I received earlier from a friend who had to endure a lecture on other prognosticating woodchucks around the country. Shameful!

The remaining commandments have to do with hunting white tails, except the last one which refers to roadwork, i.e. when it won't be done unless all major and secondary roads in the Commonwealth can be worked on at the same time during peak travel hours and seasons...Something to that effect."

You may guess that I live in Pennsylvania. You would be correct.

It's been cloudy here all morning, so with tongue firmly in cheek I'm going to say we have only 6 more weeks of winter!

Very interesting, Brad! Thanks for the great article!

Thanks, Nanina and Brian!

.
:<) Nice post, Brad. Thanks.
.
At my house, we always watch the video staring Bill Murray to celebrate the day.
.
The movie, Ground Hog Day, is a classic in which Murray plays the ultimate existential hero, Phil Connors, who sees himself as a god. The role echoes a question asked by Free Mason Manly P. Hall in his book, The Secret Teachings of All Ages, "Know ye not that ye are all gods?"
.

At one point, Phil Connors says he's a god. but this leads nowhere but to unhappiness.

It's only when he improves himself [learning to play the piano, ice sculpt], and helps others---getting Larry the camerman coffee, helping the ladies with the flat tire, the kid falling from the tree, the mayor choking at dinner, the young couple he helps overcome their doubts about marriage---that he becomes happy, and worthy of Andie McDowell's love.

In fact, Phil explicitly finds out he's not a god when he's unable to save the old bum's life, no matter what he tries.

.
Only to set the record straight:
.
It is when Phil Connors finally makes contact with his authentic self that the sun rises on a new day.
.
It's kind of a play on the biblical idea that all of a man's righteousness is as filthy rags.
.