Did James Wilson Pen the Constitution? 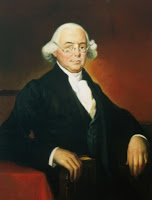 And if so, What are
the Implications?

A historic moment in the study of the Constitution and the Founding Fathers may be taking place right under our noses. Lorianne Updike Toler, a recent graduate of Brigham Young University, has thrown the historical community a curveball that apparently nobody is sure how to read. While conducting research at the Historical Society of Pennsylvania, Mrs. Toler made a discovery that if proved accurate, could throw a wrench into the workings of early American historiography. Buried deep in the archives, Toler found what she believes is an original draft of the Constitution that was written by none other than James Wilson. From the Mormon Times:

Toler said she was puzzled when she noticed, while examining what scholars consider to be the first draft of the Constitution, that there were three upside down paragraphs on the back of the document. The hurriedly composed paragraphs, beginning with the familiar words "We The People," were written in Wilson's hand.

Later, as Toler was digging through a box of legal papers at the historical society, she stumbled upon a document that appeared to pick up where Wilson's scribbled notes left off.

"To find something that is so important to the development of our country -- it was almost a sacred moment for me," Toler said, of finding the draft in November. "The founding documents, to me, are American scripture, and I had found one of the first chapters."

Toler first fell in love with the Founding Fathers as a home-schooled teenager. Her mother was an active lobbyist at the Utah Legislature, so Toler learned about democracy while doing her homework in the Senate gallery. As a law student at BYU, she founded the Constitutional Sources Project, a nonprofit devoted to making primary historical papers available online.

Only about 25 percent of the 21 million artifacts at the Historical Society of Pennsylvania are cataloged. According to Historical Society records,the society's records, the page Toler believes is a third draft of the Constitution has been filed away in a box marked simply "James Wilson: Volume Two" since at least 1970. Toler suspects the document has been in that box since it was first transcribed by Yale scholar Max Farrand in 1911.

"It was just sitting there, forgotten," Toler said.

She doesn't believe it's a coincidence.

Not everyone, however, is as excited.

"I'm pretty skeptical," said Andrew Shankman, an associate professor of history at Rutgers University in New Jersey, shortly after examining the paper. "It doesn't appear to fit with the known drafts of the Constitution."

Specifically, he said, the numbering system between the three-paragraph fragment and "The Continuation of the Scheme" don't seem to match up, he said. The style is less formal than Wilson's other drafts.

Toler acknowledged the inconsistent style between drafts but attributed the differences to a "more relaxed, scatterbrained" Wilson, she said.

"This is significant because James Wilson was always polished in front of others," Toler said. "To me, the way these documents were written demonstrates that he worked alone on this project for some time. These are his raw thoughts."

What are the implications of such a discovery (assuming the discovery is legit)? Difficult to say. But I can't wait to look over what Wilson may have written in these documents!
Posted by Brad Hart at 1:45 PM

I saw this story. To be charitable to Ms. Toler, I'm asuming she meant this find means James Wilson is to the US Constitution, what Jefferson was to the DOI.

The document, as the story goes, wasn't newly discovered, but buried?

That had to be what she meant. That jumped out to me too.

That's a good analogy, Jon. I doubt she will be able to make this case, though. It's not like she's breaking any new ground here (and I was probably a little too generous to say that she's "thrown a wrench into the workings of early American historiography). Everyone knows that Wilson had a big role to play at the convention. He was, after all, a member of the Committee of Detail:

So I think for her to make the claim that the Constitution is the exclusive brainchild of Wilson is too much. With that said, I don't think her discovery is without merit. This could still prove quite interesting.

Wow. James Wilson is my favorite Founder, as y'all might know. The wisest of all.

I don't believe this, although it's danged interesting and I hold my mind open. I wouldn't be surprised that Wilson was Da Man, the force behind the force.

Madison lost a lot of battles in the drafting of the Constitution.

But it's unimportant. As I noted in my last comment, it was acknowledged by all at the Framing debates that the top 3 were Madison, GMorris and Wilson. And it's not as if the rest of the Framers sat there like sheep.

But thx, Jon. Giving even more cred to TVD's favorite Founder, the one man, after reading his writings extensively, I have seldom if ever disagreed with. His wisdom makes my draw drop. Dude was righteous.

As a student of James Wilson (my first book was The Political and Legal Philosophy of James Wilson, 1742-1798, and a few years ago I co-edited the Collected Works of James Wilson), I was accosted Tuesday morning by kind people forwarding me copies of a Philadelphia Inquirer story about the discover of a new draft of the Constitution written in Wilson’s hand. It was not clear from the newspaper what exactly had been found, so when a HSP staff member offered to send me digital images of the newly discovered documents to me, I was thrilled. I must say I was disappointed to find that these documents had long been known to scholars. They were published in the same order suggested by Ms. Toler by Max Farrand in 1911 (The Records of the Federal Convention of 1787, 2: 150-153). It seems a stretch to call these notes a “draft” of the Constitution, and labeling them as such adds little to our knowledge of Wilson or the Constitutional Convention. It is fine that Ms. Toler found the misfiled documents, and I applaud her work with the Constitutional Sources Project, but media accounts of the significance of her discovery were, it seems me, exaggerated.

I noticed two other things that make me doubt her credentials. One--and I know some will find this objectionable--she was home-schooled. I have dealt with home-schooled students, and while they don't differ from other students in intelligence, in my experience they tend to emphasize a dubious "creativity" over analytical ability. That's a rather natural consequence of being taught by people who aren't themselves experts in all the fields you're studying. Second, the article suggests she has only a B.A., although it's not clear. I would think that if she had a graduate degree they would say so (but I'm open to correction, as that is a factual matter). So I'm left wondering whether she has the proper training to make real sense of this find.

Finally, she has a comment that leads me to suspect that she doesn't have that training. Because the writing is apparently different in style than Wilson's known writings, she speculates that it was his "relaxed, scatterbrained" mode. A good historian would provide a little more evidence that Wilson in fact had such a mode, before attributing a dubious item to him.

And, of course, there's a certain level of foolishness among all involved who suggest that any one or two men could be "the author(s)" of the Constitution. Certain people seem to consistently forget that there was a whole convention, and despite the varying contributions of many, all who participated helped determine the content by voting for or against certain proposals, and as such, they are all authors.

Apropos of the theme of this blog, Toler’s quotation literally says we should pay more attention to James Wilson, and less to Thomas Jefferson. Jefferson’s views on the separation of church and state and the true elements of Christianity are well known, and not all that pleasing to people who advocate less separation and more orthodox Christianity. Those folks can use Wilson’s less famous words in favor of their argument, as in this discussion from last fall. So Toler’s opposition of Jefferson and Wilson might not be a simple slip, or a reporter’s error; it might be a clue to why she’s eager to elevate Wilson as a major drafter of the Constitution.

Wilson is generally acknowledged as one of the Big 3, the men who spoke the most at the Framing, the others being Madison and Gouverneur Morris.

I happen to agree that Jefferson is overrated, and that Wilson should be looked at as more typical of the Founding consensus.

Wanted to share a few of the missing facts in the Deseret News article:

* I was homeschooled for two years during junior high. I attended Timpview High School for all four years of high school (9th-12th grade).
* I graduated with my BA in 2000, my JD in 2005, and will graduate with my MSt from Oxford this year, and my doctorate from Oxford in 2012.
* I was misquoted on Jefferson. The Deseret News has apologized individually to me, and I have asked them to officially print an errata. The quote should have been "I believe this draft may indicate that James Wilson is to the Constitution what Thomas Jefferson is to the Declaration of Independence." Understandable error: it's hard to type as fast as I talk.

Feel free to email with any other factual questions, lorianne.updike.toler@consource.org, or review the Q&A at www.consource.org.

Thanks for stopping by our blog, Mrs. Toler. If you get a chance, I am sure many of us would love to hear more about your find.

I have been reading your post regularly. They are highly informative and helpful.

Nice and informative post on this topic thanks for sharing with us.Thank you!

This is a good piece of history. This is alot of good information and we will share it with the class.

This is some good old American History. God bless America.