...as does much of today's Republican Party as well, to be honest [including one Donald Trump]. The "general welfare" is too ensconced in the national fabric to ever pull the rug out from those whose survival has come to depend upon it.
But once upon a time, all but widows and orphans were expected to rely upon themselves.
Article 1, Section 8, Clause 1

You will have learned that an act for internal improvement, after passing both Houses, was negatived by the President. [James Madison, the "Bonus Bill" of 1817.]


The act was founded, avowedly, on the principle that the phrase in the constitution which authorizes Congress "to lay taxes, to pay the debts and provide for the general welfare," was an extension of the powers specifically enumerated to whatever would promote the general welfare; and this, you know, was the federal doctrine. Whereas, our tenet ever was, and, indeed, it is almost the only landmark which now divides the federalists from the republicans, that Congress had not unlimited powers to provide for the general welfare, but were restrained to those specifically enumerated; and that, as it was never meant they should provide for that welfare but by the exercise of the enumerated powers, so it could not have been meant they should raise money for purposes which the enumeration did not place under their action; consequently, that the specification of powers is a limitation of the purposes for which they may raise money. 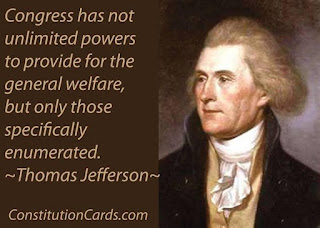 I think the passage and rejection of this bill a fortunate incident. Every State will certainly concede the power; and this will be a national confirmation of the grounds of appeal to them, and will settle forever the meaning of this phrase, which, by a mere grammatical quibble, has countenanced the General Government in a claim of universal power. For in the phrase, "to lay taxes, to pay the debts and provide for the general welfare," it is a mere question of syntax, whether the two last infinitives are governed by the first or are distinct and co-ordinate powers; a question unequivocally decided by the exact definition of powers immediately following. It is fortunate for another reason, as the States, in conceding the power, will modify it, either by requiring the federal ratio of expense in each State, or otherwise, so as to secure us against its partial exercise. Without this caution, intrigue, negotiation, and the barter of votes might become as habitual in Congress, as they are in those legislatures which have the appointment of officers, and which, with us, is called "logging," the term of the farmers for their exchanges of aid in rolling together the logs of their newly-cleared grounds.
Posted by Tom Van Dyke at 2:49 AM

You mean like the enumerated power to purchase the Louisiana Territory and pay for its exploration?

Valid objection proving the point. In leftist logic, once anyone crosses a line, that line must be obliterated forever.

That anything like the Louisiana Purchase might be sui generis is beyond the scope of their wisdom. All exceptions must forever become rules, which of course means that rules are worthless, the Constitution is worthless. Will is all that matters.

You never disappoint, sir. Thank you once again for being my object lesson.

Wilson argued that the President, as the embodiment of
national popular opinion, would be a singular force for the common good, able to lead the
nation, including the two other branches of government, through the force of his own will.
As the future President Wilson wrote, “His office is anything he has the sagacity and force
to make it.”

Check out "The General Welfare Clause and the Public Trust: An Essay in Original Understanding" By Robert G. Natelson at http://scholarship.law.umt.edu/cgi/viewcontent.cgi?article=1094&context=faculty_lawreviews


the Founding was indeed communitarian, but not in the modern-left welfare state sense