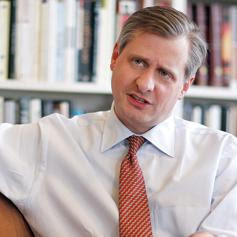 Jon Meacham, editor of Newsweek Magazine and author of the books American Gospel and American Lion (for which he won the Pulitzer Prize last year) has chimed in with an interesting article on the never-ending culture war over church-state separation and why religion should embrace the distinction rather than fight against it. He writes:

Here we go again. On April 15 a federal judge in Wisconsin ruled that the National Day of Prayer, slated for May 6, was unconstitutional. The usual voices have been heard rising in objection (Sarah Palin and Franklin Graham among them) and, proving yet again that President Obama is no radical, the administration announced its own plans to challenge the decision. One can make a reasonable case that the weight of custom puts the fairly banal idea of an occasionless, generic day of prayer (how many of you even knew that we have had such a day every year since 1952?) on the safe side of the Establishment Clause. But the right is, as ever, taking things a beat too far. Lest anyone try to convince you that God should be separated from the state, Palin said, our Founding Fathers, they were believers.

Governor Palin's history is rather shaky. Religious liberty—the freedom to worship as one chooses, or not to worship—is a central element of the American creed. Yes, many of the Founders were believing, observant Christians. But to think of them as apostles in knee breeches or as passionate evangelicals is a profound misreading of the past. In many ways their most wondrous legacy was creating the foundations of a culture of religious diversity in which the secular and the religious could live in harmony, giving faith a role in the life of the nation in which it could shape us without strangling us. On the day George Washington left Philadelphia to take command of the Continental Army, the Rev. William Smith preached a sermon at the city's Christ Church, saying: "Religion and liberty must flourish or fall together in America. We pray that both may be perpetual."

Arguments about the connection between religion and politics, church and state, have surely been perpetual. The civil and legal cases against religious coercion are well known: human freedom extends to one's conscience, and by abolishing religious tests for office or mandated observances, Americans have successfully created a climate—a free market, if you will—in which religion can take its stand in the culture and in the country without particular help or harm from the government.

There is a religious case against state involvement with matters of faith, too. Long before Thomas Jefferson, Roger Williams, the founder of Rhode Island, called for a "hedge or wall of separation between the garden of the church and the wilderness of the world," believing, with the Psalmist, that human beings were not to put their trust in princes. The principalities and powers of a fallen world represented and still represent a corrupting threat to religion: too many rulers have used faith to justify and excuse all manner of evil.

The idea of separation began, in fact, with Jesus. Once, when the crowds were with him and wanted to make him a king, he withdrew and hid. Before Pilate, Jesus was explicit: "My kingdom is not of this world," he said. Later in the New Testament, Paul argues that God shows no partiality among nations or peoples, meaning nations cannot claim blessed status, and says that "there is neither Jew nor Greek, there is neither slave nor free man, there is neither male nor female; for you are all one in Christ Jesus," which means the Lord God of Hosts is concerned with larger matters than whether one is an American or a Norwegian. A Christian nation, then, is a theological impossibility, and faith coerced is no faith at all, only tyranny. If God himself gave human beings free will—the choice to love him or not, to obey him or not—then no believer should try to force another to confess a faith.

The Founders understood this. Washington said we should give "to bigotry no sanction, to persecution no assistance"; according to the 1797 Treaty of Tripoli, ratified by the Senate and signed by John Adams, "the government of the United States is not, in any sense, founded on the Christian religion." Jefferson said that his statute for religious freedom in Virginia was "meant to comprehend, within the mantle of its protection, the Jew and the Gentile, the Christian and the Mohammedan, the Hindoo and Infidel of every denomination." There are many precedents for the National Day of Prayer, but serious believers, given the choice between a government-sanctioned religious moment and the perpetuation of a culture in which religion can take its own stand, free from the corruptions of the world, should always choose the garden of the church over the wilderness of the world. It is, after all, what Jesus did.

Here we go again is right, the same thin litany: Jefferson, the Treaty of Tripoli, and John Adams, who explicitly named the members of the Trinity in a thanksgiving proclamation.

And going after Sarah Palin, why not? A more easily beaten foe than serious scholars like Meacham claims to be.

Well, we can't all be as AWESOME and MIND-BLOWING as you, Tom. I thought some of our readers might like it. I was aware that this line of thought was WAAAAY below your STELLAR intellect.

Leave us minions alone to quarrel over mundane and irrelevant issues.

What was that all about? I'm complaining that it's always Jefferson and Tripoli from that side. If they had more, they'd use it.

Meacham's explicitly attacking the "right" here, and sets up a straw man in doing so:

But to think of them as apostles in knee breeches or as passionate evangelicals is a profound misreading of the past.

Sorry to be a dissonant voice in the echo chamber, but this stuff is misleading, and shame on Meacham, who knows better.

Ok, fair enough, I thought you were attacking me for posting it. You know by now that I will throw "commercials" as you call them out with other material. This is a blog, not a historical publication, which means that everything goes...IMO.

I can see where you think Meacham is "attacking" the right. Yeah, the Palin stuff was an obvious shot across their bow (even if she makes herself an easy target).

My apologies for taking it a different way.

No prob. I might have posted it meself, with the comments I made.

And let's be clear---Meacham explicitly attacks the right:

But the right is, as ever, taking things a beat too far.

As ever. Uh-huh. You know, we get so used to this elitest snark that we don't even notice it afterwhile. No wonder Meacham's "editing" Newsweek into bankruptcy. He insults half the country [and half his potential readership] without even realizing he's doing it.

To continue Meacham on Palin:

Lest anyone try to convince you that God should be separated from the state, Palin said, our Founding Fathers, they were believers.

That's more accurate than not, especially when the prevailing "common knowledge" is that the FFs were "deists." I don't feel like looking up Palin's actual quote, but I doubt she made them into apostles in knee britches. That was Meacham's embellishment.

And although "Church" has been separated from state---and because of the multiplicity of sects, that was never a grave danger---Palin said "God" and state. Perhaps "God" should and perhaps "God" shouldn't [and I think the Founding allows for either], but that's a different discussion.

.
I guess I line up with Roger Williams and why I favor being a Baptist over all other Christian denominations.
.
Once we allow our government to embrace religion in any form--any lawyer--worth his salt knows beyond any doubt that the door has been opened for finer and finer clarifications of what that can be drawn out out to be. How far will we go once the horse is out of the barn?
.
Baptists are allowed to have a personal interpretation of Scripture. How would our present Supreme Court decide on religious issues if, in fact, the hedge were cut down? If it were cut down, then it would be proper for the Court to decide all religious issues at some point in the game.
.
.

From the quoted article:

...believing, with the Psalmist, that human beings were not to put their trust in princes.

Tom is right but in for insufficient reasons. The fundamental problem with church state separation is not that power corrupts religion. It is that power corrupts humans... and yet here we have the typical establishment mouthpiece condescending to almost everyone, pretending to protect religion from the religious while not acknowledging the underlying problem, which he himself is fully invested in.