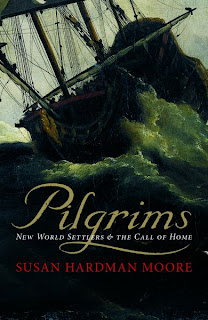 Almost everyone knows the basic story of the Pilgrims, the Mayflower and the settlement of the "New World." This brave tale of pious Puritan paupers making a new home in a strange land is as American as apple pie.

But not everyone who came to the New World found happiness, as Susan Hardman Moore's newest book, Pilgrims: New World Settlers & the Call of Home points out. From Yale University Press:

This book uncovers what might seem to be a dark side of the American dream: the New World from the viewpoint of those who decided not to stay. At the core of the volume are the life histories of people who left New England during the British Civil Wars and Interregnum, 1640–1660. More than a third of the ministers who had stirred up emigration from England deserted their flocks to return home. The colonists’ stories challenge our perceptions of early settlement and the religious ideal of New England as a "City on a Hill." America was a stage in their journey, not an end in itself.

Susan Hardman Moore first explores the motives for migration to New England in the 1630s and the rhetoric that surrounded it. Then, drawing on extensive original research into the lives of hundreds of migrants, she outlines the complex reasons that spurred many to brave the Atlantic again, homeward bound. Her book ends with the fortunes of colonists back home and looks at the impact of their American experience.

Of exceptional value to studies of the connections between the Old and New Worlds, Pilgrims contributes to debates about the nature of the New England experiment and its significance for the tumults of revolutionary England.