(One in what we hope is only a very occasional series: When Historians Attack--and misuse their scholarly authority: Part One [Joseph Ellis]; Part Two [Mark Noll]--TVD) 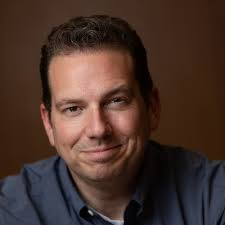 Kruse's academic fraud is pretty bad. Read for yourself. It gets even worse: 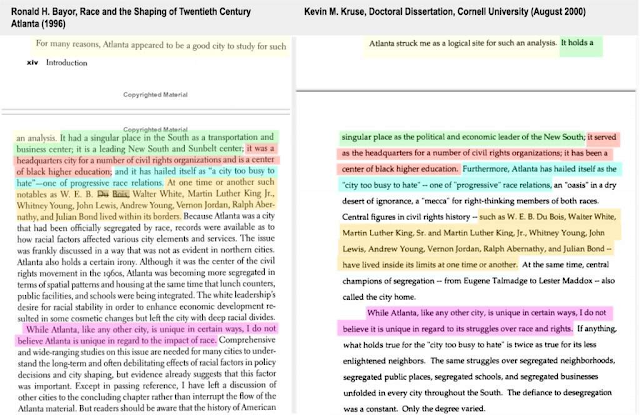 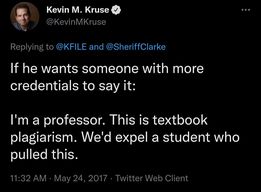 Dr. Kruse is "Twitter-famous" for taking on ideological opponents like non-historian Dinesh D'Sousa on their questionable assertions but here Kruse himself is

I'm sure that yous guys are still interested in fair and balanced presentation so I have come out of retirement to offer up a rebuttal.

"'It looks to me like very sloppy notetaking which can be fixed with an endnote. I did not see the dissertation but did read his book on [the] Atlanta suburbs and found it to be a sound and important history,' Bayor wrote in an email to the ‘Prince.’

"He argued that Magness’s allegations are made in bad faith."

"'I don’t approve of politically motivated attacks on good scholarship whether it comes from the right or left, and I believe this scrutiny of Kruse’s work is just that. There is not a story here,' Bayor added."

Endnotes
1) All credit to John Fea and all others cited in either Fea's commentary or in the article he cites.

Fea?? From "Historians Against Trump?" Hilarious. They always circle the wagons for their own.

"However, Kruse is not your typical alleged plagiarist. Described as “history’s attack dog” Kruse has made a career for himself as an activist that corrects and criticizes right-wing talking points on history. He has over half a million followers on Twitter and high-profile position at Princeton, both of which have given him clout...

"However, Kruse is not innocent here. In 2017 CNN alleged that they had found evidence of plagiarism in Sheriff David Clark’s master’s thesis from the Naval Postgraduate School. Kruse responded with a tweet that has now come back to haunt him.

If he wants someone with more credentials to say it:

In short, if the well around Kruse is poisoned, it’s because he helped poison it. He used his academic position to lend credibility to a snap judgment about plagiarism of a political opponent. Now, he is on the other end of that.

Clark, for the record, was accused of copying text without quotation marks while still including footnotes. Meanwhile, Kruse’s work doesn’t list the sources in footnotes. To many, this makes the allegations against Kruse more serious than Clark’s, which was an infraction he said they would expel a student over.

The truth is simple. Kruse was being very hyperbolic with Clark’s case. He was trying to use the news story to discredit Clark. Though the allegations against Clark and Kruse are very different, Clark’s dealt with approximately 50 passages but featured a different amount of rewriting and included footnotes, the atmosphere around them both is very similar.

That atmosphere is what makes serious conversations about this kind of plagiarism impossible. But it’s hard to feel sympathetic, as it is an atmosphere that Kruse helped create."

Phil Magness: "Simply adding a citation to the plagiarized passages in Kevin Kruse's dissertation would not have been sufficient to clear those passages of plagiarism. Quite a few historians are struggling to grasp this point.

Simply having a footnote attached to other plagiarized passages in Kevin Kruse's books is not sufficient to clear those passages of plagiarism either. Quite a few historians are struggling to grasp this point."

Hilarious. They always circle the wagons for their own.

This is the email I sent to Ronald Bayor when I first discovered that Kevin Kruse had plagiarized from one of his books. I intentionally left out Kruse's name as I did not want to accuse him until I had confirmation that the lifted passages came from Bayor.

Bayor's response confirmed that the borrowed words were indeed taken out of his book, and suggested that it warranted a closer look to see if there were any other lifted passages in the dissertation.

After Bayor learned that the plagiarist was Kruse - apparently a friend of his - he changed his tune, and is now accusing me of "political" motives for calling attention to the plagiarism. Note that he does not dispute that Kruse lifted the passages from his book, or any of the other examples I've since revealed in Kruse's works (which now exceed a dozen instances or more).

The rot in the academic history profession is deep.

Damned shame to see this, but yeah, buested.

It's the shameless dishonesty fronting for their ideological pals that disgusts me the most.

Phil Magness: "Simply adding a citation to the plagiarized passages in Kevin Kruse's dissertation would not have been sufficient to clear those passages of plagiarism. Quite a few historians are struggling to grasp this point.

Simply having a footnote attached to other plagiarized passages in Kevin Kruse's books is not sufficient to clear those passages of plagiarism either. Quite a few historians are struggling to grasp this point."