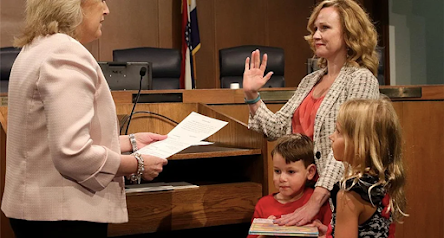 Swear or affirm, whatever.

I would say that "oath" as used here is a simulacrum if not a counterfeit. To wit:

Leaving the divine out of it, Ray, swearing on Zinn or Seuss just makes a joke of it. It is not solemn. It is juvenile theater.

Yes, great to see you Ray and good work as usual. I like it when the blog has regular front page posts from people who are not me.

It's no joke. What's a woman to do when swearing an oath?
The GotQuestons website, Why did oaths involve putting a hand under someone’s thigh (Genesis 24:9)?, explanation isn't too helpful to a woman where it explains:
"The thigh was considered the source of posterity in the ancient world. Or, more properly, the “loins” or the testicles. The phrase “under the thigh” could be a euphemism for 'on the loins.' There are two reasons why someone would take an oath in this manner: 1) Abraham had been promised a 'seed' by God, and this covenantal blessing was passed on to his son and grandson. Abraham made his trusted servant swear “on the seed of Abraham” that he would find a wife for Isaac. 2) Abraham had received circumcision as the sign of the covenant (Genesis 17:10). Our custom is to swear on a Bible; the Hebrew custom was to swear on circumcision, the mark of God’s covenant. The idea of swearing on one’s loins is found in other cultures, as well. The English word testify is directly related to the word testicles."

Thanks Ray but I don't think this applies to the Founding let alone Dr. Seuss.

I too take my testicles quite solemnly. This is not that. ;-)

Okay, THIS is an interesting story. Thank you for sharing it.

Looking for Homework Help In The USA? I recommend that you should try our academic writing services which you will never regret trying, we offer writing services under all niches and streams within your budget.

I'm always fascinated by the expectation that religion and politics should be kept separate, not just in the constitutional sense, but in some moral sense. ...as if religion was ever apolitical. Ever!

If you are looking for someone to pay to do my assignment, then you can visit the best website qqiassignments.com. where we have the best team of experts to help you to complete your assignment with 100% plagiarism-free content at a low price.