Popular Sovereignty: A Rejection of Calvinism? 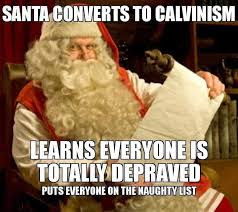 I am in the process of trying to narrow down a dissertation topic (something that will keep my attention for the next couple of years) while focusing on some aspect of early American religious history (the history I most enjoy).  Right now the leading "candidate" is looking at the history of the Levellers in England and their commitment to popular sovereignty from the perspective of their rejection of many fundamental Calvinist beliefs.  It's still a work in progress so we shall see where this eventually takes me.

Four decades ago, Historian Daniel Walker Howe wrote an interesting article entitled, "The Decline of Calvinism: An Approach to Its Study" in which he gives a detailed analysis of how and why Calvinism lost much of its appeal during the years immediately following the English Civil War, and culminating in the years leading up to the American Revolution.  Since the latter part of the 17th century, Calvinist hegemony over the message of salvation was beginning to erode, making room for newer and more democratic interpretations of Christian soteriology.  How writes:

How and why Calvinism evolved into Protestant humanism is not altogether clear. It is certainly suggestive that the two great proponents of natural philosophy in the Enlightenment, Isaac Newton and John Locke, both rejected the creedal formulations of Dort. Nevertheless, the advance- ment of learning probably did not effect the ruin of Calvinism. Seventeenth- century English and Dutch Calvinists were among the most hospitable men of their time to new knowledge. Calvinist orthodoxy as defined at Dort could, presumably, have been harmonized with the science and philosophy of the eighteenth century if men had been so inclined. From the remote American frontier, Jonathan Edwards showed how a Calvinist scientific empiricism might be constructed, but his achievement, though widely ad- mired, attracted few disciples outside the confines of New England.

Calvin's theology in its prime had given intellectual form to a powerful religious sense of dependence. A faith that God controlled all things, including the wills of men, that history was predetermined, and that their own election to eternal life was secure-this faith had provided strength and comfort to men who suffered wars and rumors of wars, religious persecution, political oppression, and, in some cases, the trials of transatlantic migration.

Calvinism and Arminianism, I would argue, should be seen as manifestations of varying social moods of fear and contentment. These changing moods were related, among other things, to international patterns of power politics. In the calmer days following the wars of religion and the revolutions against the Stuarts, when the future of Protestantism no longer seemed in jeopardy, a rigid and uncompromising confession of faith no longer seemed necessary or appropriate. Arminian and humanistic religion became prominent during the relative political stability of the early eighteenth century. The threat of militant secularism coming with the French Revolution provoked a Calvinist reaction in a few quarters, but the movement away from Reformed orthodoxy resumed during the peaceful nineteenth century.

Such changes in world politics interacted with economic and technological developments that were altering the conditions of human existence in even more fundamental ways. The two centuries of Western history after Westphalia witnessed expanding trade, increasing life-expectancy, more sophisticated financial transactions, the rise of the bourgeoisie. The growth of theological Arminianism reflected an increasingly active, rather than passive, attitude toward the universe evident in many fields of human endeavor. Peace and prosperity worked hand in hand to foster self- assurance. If men could control their earthly destiny so ably, theologians concluded men could work out their own eternal salvation as well.

To look at our case study of Massachusetts is to see that by the beginning of the nineteenth century the harrowing episodes of the Reformation had receded from the consciousness of proper Bostonians. As Yankees became more prosperous and secure, some of their sense of dependence on God evaporated. People successfully exploiting a rich continent, winning independence, confident of their future, could not know that feeling of awe which had prompted the Pilgrim Fathers to pray unto the Lord to deliver them from the perils of popery behind and a desolate wilderness before them. In the expansive, forward-looking young republic, the somber faith of the fathers did not always answer to the felt needs of the sons. Men enjoyed a greater psychic security and no longer agonized so much over their inadequacies. The emotional tension which had provided the thrust behind Anglo-American Puritanism subsided. In nineteenth-century America, religion typically expressed aspirations for spiritual achievement-not humility or asceticism.

Calvinism declined neither suddenly nor uniformly. It seems significant, though, that in so many cases it apparently declined the fastest among those people who were most socially and economically comfortable. Even in the nineteenth century, of course, life was still hard in many rural and backwoods areas. In such places Calvinism often persisted. Some nineteenth-century Americans, for example, still faced aboriginal enemies, or were still overwhelmed by the forces of nature and brooded in their lonely isolation. To such men the universe of Calvinism could still seem real. Frontier itinerant Baptist and Scots-Irish Presbyterian preachers were seldom scholarly theologians, but when they pulled their sermon notes out of their saddlebags and mounted the stump to harangue a curious crowd, they delivered in simple terms the old-time Calvinist religion of election, damnation, and a God of wrath and power. For most of the nineteenth century Calvinism in various forms remained strong in the American hinterland, as it did in rural parts of Scotland and the Netherlands and in the Boer republics of South Africa. It was in the cities, especially those on major trade routes, that Calvinism first began to lose its appeal. And within the cities, it was among the most successful people that Calvinism lost its attractiveness most readily.

Howe's comments are reminiscent of Unitarian Minister George Willis Cooke's opinion of Calvinism  (which has been cited before here at AC), which was:


The doctrine of degrees, as taught by the Calvinists, was the spiritual side of the assertion of the divine right of kings. On the other hand, when the people claim the right to rule, they modify their theology into Arminianism. From an age of the absolute rule of the king comes the doctrine of human depravity; and with the establishment of democracy appears the doctrine of man's moral capacity.

In England, groups like the Levellers were the earliest manifestation of this opposition to Calvinist theology, which may help to explain why its most prominent figure (John Lilburne) would leave his Puritan faith and convert to the Society of Friends (Quakers).

Nice to see you again, Brad, especially revisiting a topic this blog has spent so much time on over the years.

My favorite question to the Gregg Frazers and DH Harts and other paleo-Calvinists is, "Whose Calvinism is it Anyway?"

The thing is, the Reformation did not end with Luther and Calvin. It was a continuously evolving [and also liberalizing] jumble of theologies, and the historian-sociologist is not the one to decree which were Christian and which were not.

In Calvin's Geneva, Romans 13 was an iron-clad prohibition; only decades later, the persecution of the French Huguenots led to the development of "Calvinist Resistance Theory" that helped power the American Revolution.


"Popular sovereignty" rather than the Divine Right of Kings arrives by turning the equation on its head: That God appoints rulers to serve the people, and if they don't, they can be rightfully deposed. This is also a perfectly legitimate reading of Romans 13, and became the prevailing view.


(which Calvin pronounced " somewhat harsh " and to "be handled with caution", yet "admitted to be true")

advocates resistance on the basis of the su-
premacy of God's laws, responsibility of representatives, and a
mutual covenant. "You promised obedience to your Superiors,
that they might helpe you ", "to defend God's Lawes ". "If they
will do so, and keep promise with you accordinge to their office,
then do you owe unto them all humble obedience: If not, you are
discharged, and no obedience belongeth to them: because they are
not obedient to God."22 This passage Milton quotes in his Tentre
of Kings. Goodman, like Ponet and Melville, asserts that the
people were not " created of God to serve their kinges ", but "their
kinges appoynted of God to preserve his people, whereof they are
but a portion and a member.

This great liberty of holding general assemblies for counsel
is a part of the law of nations [droit des gens] ." Kings who
"suppress this holy and sacred liberty should no longer be con-
sidered kings but tyrants . As precedents for controlling kings,
Hotman repeatedly cites the ephors, and, like Calvin, Knox,
Buchanan, and Beza, combines the ideas of representative responsi-
bility and mutual covenant.43 As a striking instance of the latter
he cites, as did Beza and Mornay, the oath of the kings of Aragon."
"The king and his kingdom are necessarily bound up with each
other, by a mutual respect and reciprocal obligation."

And of course, the oppressive realization of Calvin's Calvinism in Cromwell's England in the mid-to-late 1600s sealed its fate as a politics. [Although he died of natural causes, they ended up digging him up, executing him posthumously, and they put Cromwell's head on a pike!]


Theologically, in Calvin's time, unitarianism was a capital offense; by the time of the American revolution it was just one Protestant theology among many. It is indeed interesting that the [Calvinist] Congregationalist churches became the American home of unitarianism, and that the American Baptists--also Calvinism-derived--became the foremost drivers of separation of church and state [although IMO this was also driven by their lack of political hegemony anywhere; they were always a minority sect].

It is indeed interesting how "hyper-rigid" Calvin[ism] became the seat of such political and theological liberalism.

Great comments, TVD. I like the idea of Calvinism as an evolution of theological beliefs over time, but I wonder when we can no longer call it Calvinism?

The Levellers are an interesting group too, in that they were Puritan (sort of) but opposed the King of England and the Anglican church early on. Some historians suggest that they weren't really Puritans to begin with because of the rejection of several key Calvinist beliefs.

This is all still a work in progress for me, and I still have no clue what my dissertation will look like. I do know that I like this particular topic and would love to focus on some aspect of it.

"I like the idea of Calvinism as an evolution of theological beliefs over time, but I wonder when we can no longer call it Calvinism?"


The proper term is "Reformed," but when read without context, it means little on its face. [Just as Gregg Frazer's trademark "theistic rationalism" means little without Gregg there to explain what he means by it.]

When we say "Calvinist" the meaning is clear even if it's a bit inaccurate.

I was scrolling the internet like every day, there I found this article which is related to my interest. The way you covered the knowledge about the subject and the best group in bhopal
was worth to read, it undoubtedly cleared my vision and thoughts towards Best group in Bhopal
. Your writing skills and the way you portrayed the examples are very impressive. The knowledge about best group in Bhopal
is well covered. Thank you for putting this highly informative article on the internet which is clearing the vision about who are making an impact in the real estate sector by building such amazing townships.