James Otis might have become the foremost thinker of the Founding, except he was brained by a violent Tory in 1769, and frankly, was showing signs of mental problems before that.  But 'twas James Otis who got the intellectual arguments for the American vision of liberty off to a brilliant start in 1764: 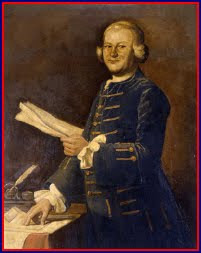 This is the unique American theory of rights as expressed in the Declaration of Independence--the foundation of man's rights is "the laws of nature and of nature's God."

Here the erudite Otis makes the essential distinction between various "Enlightenment" theories of government and rights [Hobbes and Harrington, yes, even contrary to John Locke!] and the uniquely American vision--our rights come prior to government, we don't negotiate our rights with the government, or with each other:


That to secure these rights, Governments are instituted among Men, deriving their just powers from the consent of the governed...


Here is the fatal flaw of "social contract" theory, the British understanding of rights and government according to Burke and Blackstone and Locke---We barter our natural rights with the government and receive "civil privileges" in return.

Wilson answers his own question, "Must our rights be removed from the stable foundation of nature, and placed on the precarious and fluctuating basis of human institution?"---a "social contract" with government...?

Rights reside in man, not in where a man resides.

This is the American way.
Posted by Tom Van Dyke at 1:13 PM

How'd that turn out for you?

What about the notion that Reid and Hutchinson are the ones who deserve the credit. Wilson would have studied them. I don't know how imbibed Jefferson, J. Adams and Franklin who were chiefly responsible for the DOI's content were imbibed in the Scottish thinkers like Wilson and Witherspoon would be.

I didn't see where it said Reid and Hutchison should get the credit. The reformation and Aquinas, were before Reid, so whoever said that wasn't that knowledgeable about it. Natural law is no foundation anyway. It's all enlightenment liberalism.

I do want to make clear here that the purpose of my essay is to delineate the difference between the American theory of rights and the British one, as manifest in their actual politics, not their academic philosophy.

The academic philosophy part is interesting, and I'll touch on it in my next comment, but America was built by men like Jefferson and Franklin and Washington and the rest, and their political philosophies, not their abstract theories, is what should occupy us foremost.

The rest are footnotes to history. That said, see below.

"Why did Hitchens minimize the important differences between the Declaration and Locke on the meaning of “self-evident,” on property as the basis of our rights, and about “unalienable rights” occupying the space of “property”? Like so many other thinkers, he bypassed the American Enlightenment, which had deep roots in the Scottish Enlightenment.

"Well, I don’t know if Jefferson was too inexperienced, but he didn’t write that phrase--at least, not exactly. Franklin did. This quote from Walter Isaacson’s "Benjamin Franklin: An American Life":

“On June 21, after he had finished a draft and incorporated some changes from Adams, Jefferson had a copy delivered to Franklin, with a cover note far more polite than editors generally receive today. "Will Doctor Franklin be so good as to peruse it," he wrote, "and suggest such alterations as his more enlarged view of the subject will dictate?"

The concept of "self-evident" truths came less from Jefferson’s favored philosopher, Locke, than from the scientific determinism of Isaac Newton and the analytic empiricism of Franklin’s close friend David Hume.

Hume had distinguished between "synthetic" truths that describe matters of fact (such as "London is bigger than Philadelphia" ) and "analytic" truths that are self-evident by virtue of reason and definition. ("The angles of a triangle equal 180 degrees" or "All bachelors are unmarried." ) When he chose the word "sacred," Jefferson had suggested intentionally or unintentionally that the principle in question the equality of men and their endowment by their creator with inalienable rights was an assertion of religion. By changing it to "self-evident," Franklin made it an assertion of rationality.”

Scottish common sense is all Aquinas, no? And Witherspoon was a typical 18th century democrat. All they did was cherry pick reason over the scriptures and destroy the faith and Witherspoon was part of that rabble. Had Presbyterian apostates Reid and Hutchison known true natural law, they would have referenced Paul in Romans 2 like Aquinas and Hooker did.

Pertaining to us, TJ said he got natural law from the knowledge and sentiment of the day. If that's true, then its the majority viewpoint of natural law, not TJ's opinion that is established.

TJ didn't quote Reid or Hutchison. He lied, quoting Aristotle and cicero. The colonists didn't know them. It doesn't really matter; it's a weak foundation anyway.

This is such a great resource that you are providing and you give it away for free.
Go URL

Your link didn't work for me but I believe that this might be the cited source.

My apologies for not remembering how to do a shorter link.

Natural law is a biblical concept1; in both testaments. The founding fathers rejected this principle by not inserting the theory properly into the founding.

They foolishly applied it open-ended by not enumerating the "laws of nature's God" into the founding documents.
Because they failed at this, anyone can invent any right they want, which is what u have today. Without the scriptures to guide, the doctrine is completely subjective and utterly worthless, doing more harm than good.

They didn't even proclaim the name of their God, which they knew. Instead, they used a classical word that most didn't know, thus alienating the people once more, not to mention ignoring the personal name of their messiah and redeemer, which they were supposed to be in relationship with.

As to the revolution of 1689 based on secular compact of locke sounds ridiculous. Otis wasn't a Christian anyway. It isn't strange that he would say that.

They foolishly applied it open-ended by not enumerating the "laws of nature's God" into the founding documents.

One of the flaws or at least difficulties with natural law theory is that it is very difficult to codify.

And FTR, Locke has a very ill-defined conception of natural law, in fact, it may be said he doesn't have one at all, although that didn't stop the Founders from reading one in.

If I remember right, Locke quoted Hooker when he referenced natural law, and Hooker did not neglect God's word as the authority when speaking on the matter; unlike Locke. Even more so on a government document.

The ff's did neglect Christ on the matter. Who was their saviour anyway? Nature's God is not Christ nor Jehovah, the personal name of God. Not even 18th century Spain would have referenced the Lord in that manner. It's a travesty.

Not true. The God of the Founders was indeed Jehovah. Even the deist Ethan Allen invoked him in his autobiography, and Jefferson suggested using the Pillar of Fire on the national seal.

The God of the Founders was indeed Jehovah

Our Founding Truth said...
The God of the Founders was indeed Jehovah

Ethan Allen said Jehovah, as did George Washington. The facts are not on your side.

Do you need a financial help? Are you in any financial crisis or do you need funds to start up your own business? Do you need funds to settle your debt or pay off your bills or start a good business? Do you have a low credit score and you are finding it hard to obtain capital services from local banks and other financial institutes? Here is your chance to obtain a financial services from our company. We offer the following finance to individuals-
*Commercial finance
*Personal finance
*Business finance
*Construction finance
*Business finance And many More:
and many more at 3% interest rate;
Contact Us Via Email: Personalloanesay@gmail.com