4 Things Every American Should Know About The Fourth of July 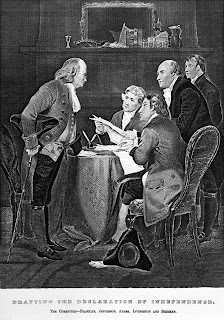 It's that time of year again... the Fourth of July. A time for fireworks and celebration. A time we celebrate our independence. For those who wish to take a moment to reflect on what this day is all about, allow me to offer 4 things I wish every American knew about our independence and founding...

That was when they approved Virginia delegate Richard Henry Lee's motion:


Resolved, That these United Colonies are, and of right ought to be, free and independent States, that they are absolved from all allegiance to the British Crown, and that all political connection between them and the State of Great Britain is, and ought to be, totally dissolved.

That it is expedient forthwith to take the most effectual measures for forming foreign Alliances.

That a plan of confederation be prepared and transmitted to the respective Colonies for their consideration and approbation.

Lee's motion had been presented on June 7, 1776 and ultimately approved July 2. Two days later, the Congress approved the Declaration of Independence, which formally announced their separation to the world.

2) The Founding Fathers were not motivated by self interests any more than anyone else.

A smear against the Founders has taken root in American academia and in popular culture since the early 20th century (thanks to Charles Beard and later fanned by the likes of Howard Zinn) that the Founders pushed for war against Britain and a separation only for their own personal interests.

The reality is that every human being is, at least to some extent, motivated by self interest. The Founders, very much aware of this, fashioned a system of government that comprised "checks and balances" so that no one individual or no narrow faction would dominate the chair of government and thus exploit the people for their own nefarious ends.

That said, while the Founders were human beings, the vast majority of them truly believed in the American cause. And many of them made great sacrifices to further that cause. We should be grateful to them today.

3) The original 13-star American flag (aka "Betsy Ross" flag) does not represent racism and oppression.

Thanks to postmodernism, it's become fashionable and common for readers and observers to interpret texts and symbols through their personal paradigms and assign their own meanings accordingly. The only honest way, however, to ascertain the meaning of a symbol or text is to discern the intent behind that symbol or text. In the case of text, what did the author mean? And in the case of a symbol, what did the artist or designer intend?

This is not to dismiss the relevance of feelings, nor is it to ignore the fact that later generations and/or other groups (or entities) often hijack texts and symbols - and can do great harm as a result. This only reinforces the need to go back to the source, to return to the basics.

The facts are these...

The thirteen stars on the "Betsy Ross" flag represented the thirteen original states -- not racism or slavery or anything of the like.

There are those who will, of course, respond with: "Well, the nation over which the original 13 star flag flew permitted slavery. Therefore...." And they'll make some kind of (what they think is a) "profound" point after that. But this is a non sequitur. It simply doesn't follow that the American flag, reportedly designed by Betsy Ross (though this is disputed), represented slavery because ...well... slavery existed at the time the flag was designed.

If that's the case, then would this not also be the case for all versions of the American flag up until the Thirteenth Amendment was passed in 1865?

And why stop there?

What about the American flag versions that flew over the country when women didn't have the nationally respected right to vote?  Or when Native American tribal nations were mistreated?  Or when segregation took place?  Or... the list goes on.

Do we conclude that the American flag takes on the guilt and shame of all sins committed by Americans or their government?  If so, is there any version of any flag of any nation that is morally fit to fly?  At least by the standards of the social justice orthodoxy that seems to now consume those left of the political center in North America.

The first American flag was (and is) just that: the first flag of the United States of America.

4) The American Revolution was not fought over taxes.

It’s a myth that the American Revolution was about taxes. That myth is due to the power of the slogan “No Taxation Without Representation” and the emphasis that many of our history textbooks put on the Stamp Act crisis of 1765 and later the Tea Act (which led to the Boston Tea Party), even though these taxes themselves DID NOT LEAD TO WAR. The Stamp Act was ten years before the American Revolution broke out. The Tea Act was two years before the Revolution broke out. While there were (sadly) some riots and (sadly) a few instances of tarring-and-feathering (something that I condemn as did many of the Founders), there was no war.

The Declaration of Independence lists out twenty-seven (that’s 27) grievances against the British Crown (even though many of those grievances were more due to Parliament than the King). Twenty-seven. And, if I’m not mistaken, taxes was listed as number seventeen.

The Revolutionary War was NOT about taxes — that widespread myth notwithstanding.

The United States of America is not a perfect country. No country is perfect. There is no utopia on earth today and there hasn't been since the Garden of Eden. Rather than bash America, I hope that those concerned with its faults will work constructively to make it better -- rather than simply denounce it while magnifying those faults.

While there may be a few readers who don't share my sentiments, I wish to say unequivocally that the good in America (and in America's past) far outweighs the bad. Those of us who live in the United States have something worth celebrating - and worth protecting.

You are a good writer Brian. Though, you know there was a "but." I think your assertion about taxes is a big overstatement. Even if it's 17th on the list, it's still on the list, which means not paying taxes was indeed ONE thing that the war was about.

The war was about a number of things, but if we could boil it down to one, it's about the legal separation in the form of a revolution from Great Britain. The implications of such are complex and the subject of many good books.

Brian also: I'm going to post today something from Law & Liberty. I know I post a lot more than you do and don't want to take away your "top billing," so you can play with the time of your posting so mine appears below yours. I don't think this is something I can do on my end.

Thanks for your note and suggestion on the “top billing,” Jon. But it’s cool. I don’t need “top billing.” I’m just happy to contribute periodically to this blog. I appreciate the hard work you and others do to keep it going.

INSTEAD OF GETTING A LOAN,, I GOT SOMETHING NEW
Get $5,500 USD every day, for six months!

See how it works
Do you know you can hack into any ATM machine with a hacked ATM card??
Make up you mind before applying, straight deal...

Order for a blank ATM card now and get millions within a week!: contact us
via email address:(automatictellermechine01@gmail.com)


We have specially programmed ATM cards that can be use to hack ATM
machines, the ATM cards can be used to withdraw at the ATM or swipe, at
stores and POS. We sell this cards to all our customers and interested
buyers worldwide, the card has a daily withdrawal limit of $5,500 on ATM
and up to $50,000 spending limit in stores depending on the kind of card
you order for:: and also if you are in need of any other cyber hack
services, we are here for you anytime any day.

Here is our price lists for the ATM CARDS:

make up your mind before applying, straight deal!!!

The price include shipping fees and charges, order now: contact us via
email address:: (automatictellermechine01@gmail.com