The reason for my return visit is an online copy of a 7/17/2014 letter from Freedom From Religion Foundation (FFRF), Staff Attorney, Andrew L. Seidel to  Superintendent, Federal Hall Memorial, Shirley McKinney (see here).

In the letter Andrew Seidel describes a trip to lower Manhattan during which time he visited Federal Hall along with several other historic sites. At this point in his letter, he comments, "I was surprised to see painted on one wall a transcript of Washington's presidential oath featuring the words "So help me God" below the date, April 30, 1789. (In the letter, Page 5, shows a picture of the Washington Inaugural Exhibit.) 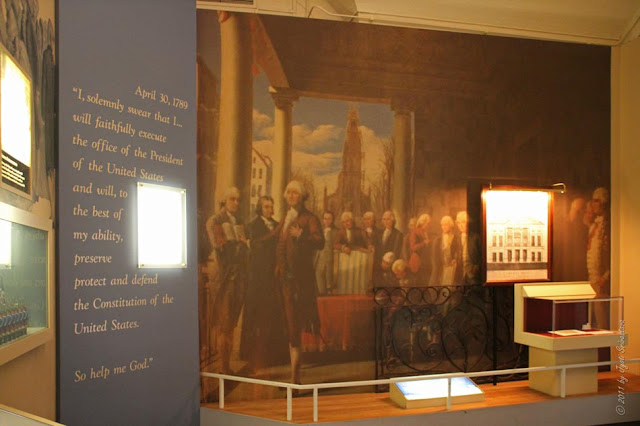 Seidel's letter continues by stating his objections regarding the Washington's alleged use of a non-constitutional religious phrase.

On 1/30/2015 NPS Shirley McKinney responded with a letter. Here's a major portion:


It is clear that there is some question whether Washington added "So Help Me God" to the inaugural oath prescribed in the Constitution.  The few written eyewitness accounts do not mention it. However the phrase "So Help Me God" was included when swearing oaths required in the courts, the military, and other public offices and was an accepted part of such solemn commitments at the time. Indeed, since it was in widespread use it may have passed without comment by eyewitnesses.

President Washington is known to have taken the inaugural oath with his hand upon a Bible, and kissed it afterward. It seems likely as not that he added the phrase "So Help Me God." However, it also appears that there is no conclusive evidence available at this time to settle the question of his use of the phrase at this inauguration.

Now, while McKinney prefers to say, "there is no conclusive evidence ... to settle the question," the fundamental problem for those who visit Federal Hall is they are not made aware that the Washington Inaugural Exhibit is just another display of mental gymnastics.

Please accept my sincere apology for not responding to your February 16, 2017 inquiry sooner.  The National Park Service takes pride in offering factual and historic interpretive information to our constituents and I thank you for bringing this matter to our attention.

I've attached the National Park Service's January 17, 2014 response to your similiar inquiry related to information on our Federal Hall website.  In our response to you we agreed to delete the erroneous statement.  Unfortunately, back in 2014, after Mr. Laise retired, park staff failed to make the connection to the exhibit and and did not correct it as well.  However, we are in the process of replacing the exhibit panel and a temporary disclaimer sign has been installed to inform our visitors of this error until the updated exhibit panel is refabricated and installed.

Thank you again for your interest in the National Park Service, specifically Federal Hall National Memorial.