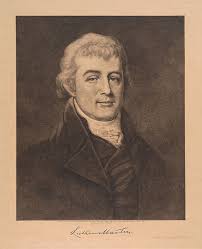 
Lost in the mists of our historical mythology is the fact that America's Constitution was not always the "sacred text" it has come to be considered. Indeed, among America's Founding Fathers there were many who had deep reservations about the Federalist conception of government developed between the opening of the Constitutional Convention in 1787 and the adoption of the Bill of Rights in 1791.

The principal fear of the anti-Federalists, as they were called, was that the rights of the individual states would be usurped by the central government. It has taken almost 220 years for their fear to be fully realized, but the surreptitious nationalism which they saw embedded in the Constitution's text has largely become a reality.

Bill Kauffman chronicles the life and career of one of the leading anti-Federalists in Forgotten Founder, Drunken Prophet: The Life of Luther Martin. Perhaps the foremost advocate of "states' rights" and the personal freedoms they were intended to ensure, Luther Martin was a true Founding Father -- though far from a model of the sobriety and rectitude usually ascribed to those men whose profiles grace our stamps, coins, and paper currency. Contemporaries spoke of him as "perpetually in his cups, coarse and gross, pedantic and long-winded, sedulous and acidulous."

They also saw him as "convincing" in his forceful arguments against the proposed Constitution. In September 1789, two weeks after leaving the Convention in Philadelphia for the last time, Martin charged that the new Constitution was:

...neither wholly federal, nor wholly national -- but a strange hotch-potch of both -- just so much federal in appearance as to give its advocates...an opportunity of passing it as such upon the unsuspecting multitude, before they had time and opportunity to examine it, and yet so predominantly national as to put it in the power of its movers, whenever the machine shall be set agoing to strike out every part that has the appearance of being federal, and to render it wholly and entirely a national government.

Kauffman lays this trans-mogrification of the American idea at the feet of Alexander Hamilton and James Madison, and he doesn't mask his feelings about these two "arch-nationalists." He charges that Madison, usually lionized as the father of the Constitution, actually desired "the total abolition and destruction of state governments."

Of Hamilton he laments, "Burr should have killed [him] sooner."

Sounds like an interesting book, though I don't buy his argument that the founders envisioned the Constitution to become the breastwork of a massive federal government that usurped all power from the states. Certainly Jefferson and Madison wouldn't favor it. Besides, the Federalist Papers are not a petition for massive federal government but an explination of why the Art. of Confed. weren't working.

One of my favorites from the past few years. The ISI Lives of the Founders series in general is excellent (in fact I'm about to post about the recent one about Charles Carrol.)

Martin was probably not quite right about Hamilton and Madison's intentions, but the book is a great example of history against expectations. A good reminder that not everybody was on board with the Constitution and that some still aren't.

In any case, I highly recommend the book.

Indeed, and a reminder that those who argue "slippery slopes" like Luther Martin did aren't illogical alarmists. Indeed, they are often prophets.

Yes, the Federalist Papers argued explicitly against the anti-Federalist's predictions about the central gov't becoming Leviathan. But it did.

As for Madison, he's a sphinx, as was his custom. I heard one biographer on C-SPAN say it was his biggest surprise how federalist---that is in favor of state and local control---Madison was. Others clearly disagree.

Hamilton, of course, suggested at first we should have a monarchy. But I do recall him arguing that if we wanted to build canals on federal dollars, we should amend the Constitution to allow that, beyond some vague "general welfare," that could be taken to justify just about any utopian scheme.

Brad,
You are clearly correct that Jefferson didn't favor a national government. But Jefferson wasn't too excited about the Constitution.

Looks interesting. Thanks for the post. Maybe Martin should join forces with the Vodkapundit!

Liked your blog, electratig. Hope to hear more from you.