***My sincere apologies for going MIA the past few weeks. I realize that this isn't the most thought-provoking post in the world but I didn't want to let too much more time go without posting at least a little something. I promise to post better material in the near future.*** 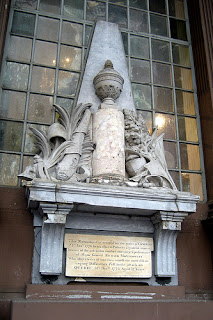 The United States has no shortage of monuments and memorials. Whether in the form of elegant architecture, massive stone carvings or beautiful tapestries, Americans have never shied away from paying homage to their past (and thank goodness).

Of all the famous monuments that span across this massive nation, one goes relatively unrecognized, and it just so happens that this monument happens to be America's FIRST official monument. On January 25, 1776 (the anniversary is just a few days from today) the Continental Congress authorized the first American war memorial in its then short history. It was dedicated to Brigadier General Richard Montgomery who was killed during the failed attack on Quebec the previous year. It was also at this battle that Benedict Arnold was wounded.

Due to his exemplary leadership and bravery in battle, Montgomery was honored with the highest recognition the nation could afford him. The monument, which symbolizes Montgomery's bravery and intellect, was adorned with a plaque which reads:

This Monument is erected by the order of Congress 25th Janry 1776 to transmit to Posterity a grateful remembrance of the patriotism conduct enterprise & perserverance of Major General RICHARD MONTGOMERY Who after a series of successes amidst the most discouraging Difficulties FELL in the attack on QUEBEC 31st Decbr 1775. Aged 37 years.
Though obscured by years of progress, this monument, which still stands today at New York City's St. Paul's Chapel (directly across from where the World Trade Towers once stood), serves as a poignant memorial to all Americans (not only Montgomery) who fought and died in the American Revolution. Though virtually forgotten by the majority of the American populace, Montgomery retains a special spot in the pantheon of great American generals.
Posted by Brad Hart at 9:45 AM