Erie Canal and the "Burned-over District" 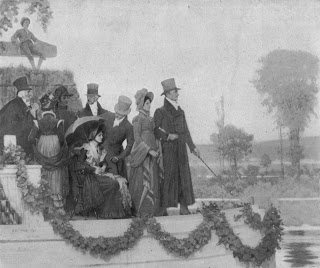 One of the largest achievements of the early 19th century was the completion of the Erie Canal. Thanks to this monumental feat of engineering genius, New York was able to quickly surpass New Orleans as the favored port of entry for shipping and trade, which made New York a financial juggernaut in the infant American republic. The canal turned out to be such a huge success that the debt for the project was paid off within the first year of the canal's operation!

The Erie Canal brought a tremendous amount of wealth and commerce to the state of New York. In fact, it is because of the Erie Canal that New York earned the nickname "The Empire State."

What a lot of people don't know when it comes to the Erie Canal is that its construction helped to spark the fires of religious revival throughout the state. The area of western New York, which evangelist Charles Finney dubbed "the burned-over district," was a particular hot bet for religious fanaticism scarcely seen in any other part of the American republic. Though the construction of the Erie Canal cannot be given full credit for this surge of religious enthusiasm, it should be credited for being one of the major factors that led to this phenomenon. Mormon founder Joseph Smith, who lived in this region, illustrated just how passionate this new zeal for religion was when he wrote:

There was in the place where we lived an unusual excitement on the subject of religion. It commenced with the Methodists, but soon became general among all the sects in that region of the country, indeed the whole district of the Country seemed affected by it and great multitudes united themselves to the different religious parties, which created no small stir and division among the people…Priest contended against priest, and convert against convert so that all their good feelings one for another were entirely lost in a strife of words and a contest about opinions (Joseph Smith, Jr., “1839 History,” The Papers of Joseph Smith, vol. I, 269-270).

In his work The Market Revolution, historian Charles Sellers suggests that the construction of the Erie Canal brought an infusion of market capitalism that literally transformed the region. And as is often the case with any major change, a large percentage of the American populace began to see the Market Revolution as a destructive force. The communal subsistence culture, which had tied family members and neighbors together in a tight web of economic and social interdependence, was quickly being replaced by the profit-driven mentality of the Market Revolution. As a result, hundreds of American families sought to reclaim the "lost" communal dependence and purity of the pre-Market Revolution era by turning to religion. And while many of these religions embraced the Market Revolution in western New York, others fought against it. A sudden surge in new religious communal societies, each embracing a communistic economy and the hope of a rapidly approaching millennium, became the antithesis to the capitalist changes enveloping New York. These societies saw capitalism as an evil to be avoided. The various religious leaders that emerged from western New York at this time (Ann Lee, Charles Finney,and Joseph Smith just to name a few) labored to protect their "flocks" from the clutches of capitalist enthusiasm, each gaining different degrees of success. As historian Charles Sellers states:

For intensely pressured Yankees, this New Divinity's apocalyptic utopia was an irresistible fantasy of surcease from market pressures. Amid "universal peace, love, and general and cordial friendship." These new churches promised "no unrighteous persons" would "invade the rights and property of others." Invoking one of the subsistence culture's favorite Biblical images, they declared that "every one shall securely sit under his own vine and fig-tree, and there shall be none to make him afraid." Lawsuits, luxury, and waste would cease. There would be "such benevolence and fervent charity" that "all worldly things will be in great degree common, so as not to be withheld from any who may want them"

These new communal denominations were not the only ones interested in "The Burned-over district." Many of the established religions (Methodists, Quakers, Baptists, Catholics) also flooded the region with missionaries, as the expansion westward marked a change in how religions addressed the need for new converts. By appealing to their need for "old school" communal subsistence as opposed to the emerging market economy, several of these faiths experienced a dramatic increase in new devotees who were happy to use their newfound faith to castigate market economics as the tool of the devil.

But what interests me most about the "Burned-over district's" abhorrence of market capitalism in the name of God is the fact that the religions of this region were themselves participating in a form of ecclesiastical capitalism. The heated competition between the emerging faiths of this region and the established religions of the time caused both to clash in a passionate quest for the souls of western New York. As a result, these churches turned to newer methods of preaching and conversion, which were tailored to the needs and desires of the people. Each promised to deliver bigger and better things than their competitors, while at the same time insisting that the "other guy" would surely deliver their followers to the fires of hell.

And though these competing faiths shared in their condemnation of market capitalism, they themselves invoked one of capitalism's most basic components: competition. The Market Revolution didn't simply transform how the exchange of services and goods were conducted but it also changed the way religion was preached. As a result, western New York became a hotbed for economic and religious revival. It's no wonder why Charles Finney chose to call it the "Burned-over District."
Posted by Brad Hart at 2:19 PM

...the religions of this region were themselves participating in a form of ecclesiastical capitalism. The heated competition between the emerging faiths of this region and the established religions of the time caused both to clash in a passionate quest for the souls of western New York. As a result, these churches turned to newer methods of preaching and conversion, which were tailored to the needs and desires of the people.


Similar, Adam Smith on the rise of Protestantism in Europe:

The austerity of their manners gave them authority with
the common people, who contrasted the strict regularity of their
conduct with the disorderly lives of the greater part of their
own clergy. They possessed, too, in a much higher degree than
their adversaries, all the arts of popularity and of gaining
proselytes; arts which the lofty and dignified sons of the church
had long neglected, as being to them in a great measure useless.


The reason of the new doctrines recommended them to some, their
novelty to many; the hatred and contempt of the established
clergy to a still greater number: but the zealous, passionate,
and fanatical, though frequently coarse and rustic eloquence,
with which they were almost everywhere inculcated, recommended
them to by far the greatest number.

.
On a personal note, the reason I first came to be interested in learning about history had to do with the Erie Canal.
.
My ancestor, Elisha Walker Rumsey, was a young man living in central Vermont wanting to improve his lot in life. His wife, my ancestor, was a Churchill. Elisha and his wife, Olive Churchill, moved with her parents to western New York on the completion of the canal to make their fortune. Shortly after, Olive died and Elisha was left with five children.
.
He and Mary Anne Sprague (Spring) set out to Michigan before it was a state. There they met a John Allen and his wife, Ann Allen. They joined forces and bought a section of land on the river in Washtenaw County where there were large oak arbors. They named the place, Anns' Arbor, on behalf of their women.
.
I got my information from professor emeritus of history, Russel Bidlack at University of Michgian.
.
Once I was able to see how my genealogy was affected by history in the making, my interest was unsatisfied.
.
I don't claim to be a scholar; but, I like to learn about history and how things came to be as they are. It is a fun thing for me.
.
No amount of put downs will turn me off.
.
I have copies of Professor Bidlack's notes papers on my ancestor. We gave the originals to the Bentley Library in Ann Arbor.
.
History is so much more interesting when one sees how it affects their coming to be who it is they are.
.