"Prefer Christians for their Rulers" 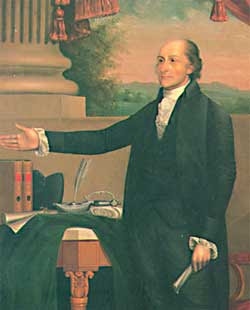 Not all of our founding fathers were "theistic rationalists." In fact, some were quite orthodox in their views. Though I still maintain my belief that the majority of the founders held to a more unitarian faith in divinity, I cannot deny that some believed quite passionately in their orthodox faith.

Take for instance John Jay, co-author of the Federalist Papers, President of the American Bible Society, and our nation's first Supreme Court justice. Jay, who was very much a devout Episcopalian, kept most of his religious beliefs private during the course of his life. However, when Jay did speak out about religion it was very easy to know where he stood. For example, Jay was so insistent on keeping with the traditional orthodoxy of the Anglican/Episcopal faith that he was among the minority who sought for the approval of the Archbishop of Canterbury when it came to the ordination of new Episcopal bishops.

I am surprised that more Christian nation apologists do not invoke the legacy of John Jay. In my brief readings of Jay's letters, etc. I have found him to be a powerful supporter of Christian orthodoxy and of the idea that America was founded as a Christian nation. And though I disagree with Jay's conclusions, the fact remains that he was a powerfully influential founding father who stuck to his guns on this issue.

I guess it comes as no surprise to me that Wallbuilders has jumped all over the records of John Jay, and who can blame them. Jay is arguably one of the more appealing founders for the Christian nation crowd. Just take for example the infamous quote Jay made on the subject of voting:

"Providence has given to our people the choice of their rulers, and it is the duty as well as the privledge and interest of our Christian Nation to select and prefer Christians for their rulers."

In addition, Jay's words on America's providential destiny to precede the second coming of Jesus Christ is sure to excite Christian Nation advocates everywhere:

There is certainly reason to suspect, that as great providential events have usually been proceded and introduced by the intervention of providential means to prepare the way for them, so the great event in question will be preceded and introduced in like manner. It is, I think, more than probable, that the unexpected and singular co-operation, and the extraordinary zeal and efforts of almost all Christian nations to extend the light and knowledge of the gospel, and to inculcate its doctrines, are among those preparatory means. It is the duty of Christians to promote the prevalence and success of such means, and look forward with faith and hope to the result of them.

And while speaking of the differences between Europe and America, Jay wrote:

I sometimes flatter myself that Providence, in compassion to the afflicted of these countries, will continue to leave America in a proper state to be an asylum to them.

To what events this country may in future be instrumental, is indeed uncertain, but I cannot persuade myself that Providence has created such a nation, in such a country, to remain like dust in the balance of others.

So while I agree that the majority of our founders were more unitarian and less orthodox in their faith than Jay, it would be a mistake to categorize ALL the founders as such. For in Jay, the Christian Nation crowd has a powerful advocate.
Posted by Brad Hart at 1:04 PM

I'd suggest that the one bugaboo about John Jay is that---following John Locke's sentiments, if I'm not mistaken---he urged that Roman Catholics be banned from holding public office, as their true allegiance would be to Rome, not America.

But to the unnuanced reader of history, that would simply come off as religious bigotry, and great hay could be made of it.

Not such a great spokesman for the Christian Nation cause, then, strategically speaking. Grab a few quotes from him, mebbe, but keep him away from front & center.

YOu are right about Jay and his sentiments about Catholics. He argued that anyone with a papal allegiance was unfit to serve in any public office. And yes, this is an eye soar for Jay. However, I don't think it hurts his "Christian nation" credentials much. After all (and this is not meant as an excuse) there were a large number of people that held anti-Catholic views. John Adams, for example, was very much an anti-Catholic, though I am uncertain if he would have been against them serving in government like Jay.

In fairness to John Jay, he held those beliefs in the 1700s - just two centuries removed from the Protestant Reformation. The times were different. I don't think Jay would feel that way about modern Catholics. If he did, it would be for far different reasons. In fact, he'd probably prefer modern, orthodox Catholics over the "cafeteria Catholics" (as well as "cafeteria Protestants" for that matter) so prevalent today.

Oh, and Brad, great article -- except I disagree strongly that a majority of the Founders (whom I define as signers of the DoI and Constitution) were Unitarian.

The evidence is pretty strong that a majority of the second-tier and third-tier Founders (especially when you expand out to include the signers of the Articles and your state leaders) were Christian.