America's Jubilee and the Market Revolution 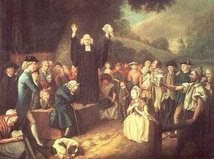 President John Quincy Adams, the Republic’s 6th executive chief, awoke around 7:00a.m. to a rainy, but sunny day in the nation’s capital. The thermometer read 78 degrees, and the clouds looked as though they would soon disappear. Today was going to be a beautiful day. After a brief breakfast, the President met with his cabinet in the Executive Mansion and then made his way via the Presidential carriage to the capital building. A large procession, complete with military escort, trumpeters, cavalry, and a military band accompanied the President. An energized crowd gathered to watch the spectacle, eager to commence the day’s festivities. After all, today was no ordinary day. Today was America’s Jubilee: July 4, 1826!

"America's Jubilee" was arguably the most festive July 4th our country has ever celebrated. Parades, festivals, dances, etc. were held all throughout the infant nation in celebration of America's 50th birthday. Even the legendary Marquis de Lafayette was welcomed from France with the highest of pomp and circumstance. A countless number of songs and poems were written to commemorate this landmark day. Here is one of my favorites that I found on an old broadside. The poem was written by a woman from Philadelphia named K.A. Ware:

The deeds of our heroes, their courage sublime,
Have long been the pride, and the theme of our story
And their triumphs shall mark the divisions of time,
And be hallow’d as the Epochs of National glory!
On this festival Day,
Our glad homage we’ll pay
To the God of the Pilgrims! who lighted their way,
And ne’er shall his flame on our altars decline,
Till earth shall to chaos her empire resign! (From America's Time Capsule: Three Centuries of Broadsides)

One of the most interesting aspects of "America's Jubilee -- as evidenced by the poem above -- is the powerful sense that America's prosperity was directly attributed to divinity. As we all know, by the early part of the 19th century, America's religious landscape had undergone a renovation of monumental proportions. The emergence of a second Great Awakening, combined with the groundbreaking impact of the Market Revolution, caused Americans to drastically change their perception of providence and its role in American history.

By the time of "America's Jubilee," the entire nation was literally being swept by a wildfire of capitalist and religious fervor. The quintessential example of this enthusiasm can be seen in early 19th century western New York, an area that evangelist preacher, Charles Finney, dubbed "The Burned-over District." Joseph Smith, a resident of western New York and eventual founder of the Mormon faith, best described the atmosphere of the enthusiastic region when he wrote the following:

There was in the place where we lived an unusual excitement on the subject of religion. It commenced with the Methodists, but soon became general among all the sects in that region of the country, indeed the whole district of the Country seemed affected by it and great multitudes united themselves to the different religious parties, which created no small stir and division among the people…Priest contended against priest, and convert against convert so that all their good feelings one for another were entirely lost in a strife of words and a contest about opinions. (Joseph Smith, Jr., “1839 History,” The Papers of Joseph Smith, vol. I, 269-270.)

Not only had a wave of enthusiastic religion swept across the New York landscape -- as it had most of the country -- but the Market Revolution's influence had taken as strong of a hold in these same regions. The completion of the Erie Canal, for example, catapulted New York to the avant-garde of capitalist economics.

Naturally, this conflict between the forces of capitalism and the forces of religion caused an intense revolution in the social and cultural norms of American society. A countless number of impoverished citizens sought the solace of traditional communal religion and neighborhood subsistence. As a result, hundreds of communal religious sects were created to meet the needs of the people. Religious enthusiasts like Ann Lee, who became the founder of the Shaker movement, inspired her followers to embrace a communal lifestyle of celibacy and nonresistance, claiming that she had received a divine manifestation of Christ’s impending return. Jemima Wilkinson, who founded the Community of the Publick Universal Friend, also claimed divine revelation, and insisted that Christ had chosen her as his personal messenger, sent to prepare the world for millennial glory. Like Ann Lee, Wilkinson also established a communal order of celibacy and economic equality. The New Israelites, led by a man named Winchell and Oliver Cowdery, also preached divine revelation that pointed to an impending millennial apocalypse. And perhaps the most effective of these religious communities, the Mormons, traveled to the most distant regions on the American continent to establish what they called "Zion."

America's Jubilee should thus be seen as a marker of sorts, in which enthusiastic religion and capitalism combined to literally revolutionize the social landscape of America. Even Thomas Jefferson, who was never one for religious rhetoric, seemed to be caught up in the spirit of "America's Jubilee." In one of his last letters to John Adams, Jefferson seems to support the notion that America's destiny was sanctioned by the heavens. In almost prophetic form, Jefferson wrote:

"We shall have our follies without doubt. Some one or more of them will always be afloat. But ours will be the follies of enthusiasm, not bigotry. Bigotry is the disease of ignorance, of morbid minds; enthusiasm of the free and buoyant. Education and free discussion are the antidotes of both. We are destined to be a barrier against the returns of ignorance and barbarism. Old Europe will have to lean on our shoulders and hobble along by our side, under the monkish trammels of priests and kings." (Thomas Jefferson to John Adams, August 1, 1816).

Though traditional in his views on religion, Jefferson himself acknowledges a destiny for the future of America, which he sees as surpassing the greatness of Europe -- impressive for a man who had preached of the superiority of France nearly all his life.

In the end, "America's Jubilee" was not only a celebration of the nation's 50 birthday, but was also an unconscious recognition of the future greatness of American society. By adapting religious ideology to fit the sweeping changes of the Market Revolution, 19th century Americans were able to effectively develop a providential destiny for their nation, which eventually transformed the religious landscape of the entire county.
Posted by Brad Hart at 4:22 PM

Excellent post, Brad. Though I have not read a lot about the Market Revolution, I realize that it has become a major area of interest for historians today. I think your illustration of how religion was influenced by the Market Revolution is not only extremely interesting but is also extremely insightful. I'd love to hear more on this topic. Perhaps you could make this a focus for future postings...that is...if you feel up to it.

This is good. I love what you have done with this blog.

Thanks so much for taking the time.

Thanks, Steve-o and hysperia. We appreciate the comments!